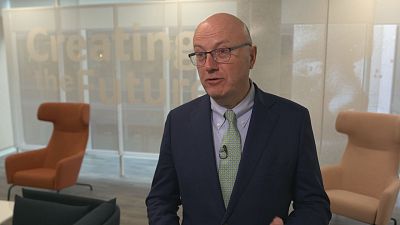 The European Innovation Council Accelerator seeks to give top class innovators the rocket fuel they need to take off. In addition to financial support, it also offers coaching and networking services, to put entrepreneurs on the right path to starting and running a successful business.

To find out more about how the EIC Accelerator is helping to foster innovation and Europe's future tech companies, Business Planet spoke to Professor Mark Ferguson, Director General of Science Foundation Ireland and Chair of the European Innovation Council Advisory Board.

To watch the full interview, click on the video link above

There are a lot of business accelerators, what’s unique about the EIC accelerator?

“So the EIC accelerator is different from all of the other accelerators that are out there. Essentially, we are interested in companies with a high risk, a risk where perhaps the private investor may not yet go. And those companies need to be really disruptive. They need to be disrupting existing markets, or have a completely new product, and we are willing to invest there. We will want to crowd in subsequent investment. We’ll want to de-risk it, and we’ll want to make sure there's a very secure business plan, and we’ll want to make sure the technology and the science is good, but we are willing to take a higher risk than others - and that's the real difference.”

How do you support innovators and entrepreneurs?

“Well, there are various things. First of all, there is a grant application, you can get up to 2.5 million euros and equity up to 15 million euros. So that's the investment part of the portfolio. Then, of course, there is networking and consultancy, so you can get help from a whole range of consultants across Europe who will provide coaching in whatever area the company needs, and then there's networking with larger corporates… So that's essentially what the EIC is doing. And its real objective is to invest in disruptive technologies that will be fantastic businesses for Europe, that will hopefully solve a lot of societal problems and that will grow in scale to be large companies. I mean, I often paraphrase it by saying, those companies are solving relevant problems in responsible ways.”

How do you choose companies? Is there a specific eligibility criteria?

“I think you have to have a good business plan. You have to have the good technology. You have to have the right team, so that team can take the business and grow it. You need to know what you're asking for, your plans. So that's basically the kind of tips. There's no restriction. I mean, this is about building the businesses for Europe. We want Europeans to get the success out of these companies, both in their economy and in terms of what the companies are doing. And we want those companies to be world leading. We want them to be absolutely world leading companies. So, it's not for little incremental things. It's for those kind of big disruptive ideas. It's also about stuff that can really grow and scale. And as I said before, we're willing to take a higher risk. And of course, we have blended finance. Almost nobody else offers blended finance. A grant, which allows you to de-risk it, because maybe it's a great idea, but it's not quite there, and maybe it won't be there when you've got the results that you need and then equity and leveraging funding in. So my strong recommendation, is you know, read the form, answer the questions, feel free to network and talk with people. Make an application. You will get feedback, and that's what I would advise people to do.”

Are you a public venture capitalist?

“Essentially, we are a public venture capitalist. I mean, we are going in in one sense where there is a market failure and the appetite for risk in Europe in general is less than, for example, it is in the United States. If you look at the objective figures, then the US invests net, net five to ten times as much more than Europe on an annual basis. So that's the hypothesis we're testing. We believe that the science is really good in Europe. There is good evidence for that - in terms of the citations and standing. We believe the businesses are good. We just think that you need to have some way of catalysing that investment, some way of de-risking it a little bit more for the investor. And that's where we're going in. So in one sense, we're like a public venture capitalist. In another sense, we're doing what public goods should do. And that is we're looking where there is a market failure. Not a market failure, because we're going to invest in crap companies. Absolutely not! A market failure because we're willing to take a higher risk. And part of that is in the blended finance. I mean, there's no venture capitalist in the private sector that I'm aware of who will give you a grant. But we will. And what is the purpose of the grant? The grant may be because you have a fantastic idea, a fantastic piece of technology. Just bring us the good companies and we look at them. That's what we're doing.”

Practical question, very simple question, but how do companies get in touch with you?

“Look on the website, it tells you the e-mail address and it tells you the contact phone numbers and the application and apply. The applications are open all the time, but we assess them every three months. So if you want to manage the decision, then if you apply, you can work out roughly how long you're gonna wait for a decision, because as I say, applications open at any time, but we do it every three months. The time from submission, from that cut-off date to decisions should be less than six months. That's the criteria, has been so far, so it's a rapid turnaround. It is not a big bureaucratic system. And then the other way that you can approach it is go to your national office. Every country in the European Union has a national delegate who is responsible for looking at the European programmes, European innovation programmes, as well as the national ones. They're all briefed on the EIC. So if you'd prefer to talk to somebody in your own country as opposed to, you know, go on a website and talk to somebody on the phone, you can do that through the national offices that are in all the European countries. So it's pretty straightforward. And we welcome all inquiries and we welcome all applications.”