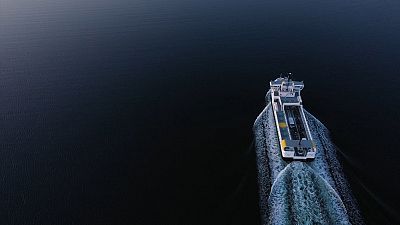 For a few months not, Ellen has been connecting two Danish islands. But what's different about this ferry's passage is she does this without noise or smoke.

Inaugurated in august, Ellen is the most powerful 100% electric-ferry in the world and is paving the way to a concrete transformation of maritime traffic.

At her home port on the Danish island of Ærø Ellen loads her passengers and recharges her batteries.

Once disconnected, the 750-ton ship leaves for one of its five daily trips to a neighbouring island.

This project was co-financed by the European Union in cooperation with islanders eager to achieve carbon neutrality.

She's not the first electric ferry but, as E-ferry project coordinator, Trine Heinemann explains, there are two reasons why she is so special:

"Firstly, we’re fully-electric, so there is no oil on board to run anything on the ship. And secondly, it’s the distance that we cover, which 22 nautical miles. That’s seven times what existing ships have covered. And the longer distances you start covering, the most usable your technology becomes. And I think in Europe it’s about 80 % of the ferry transportation that can be covered in a 22 nautical miles range."

Another notable feature is that Ellen is injected with the surplus from wind turbines on Ærø, which produce 130% of the electricity needed on the island.

Ferries are today the largest polluters on the island and Ellen will save 2,000 tons of CO2 emissions a year.

A tour of Ellen

Under her hull are four quiet engines and 56 tons of lithium-ion batteries with a capacity of 4.3-megawatt hours.

But there is no backup oil generator.

"We reserve at all-time a certain amount of energy in each battery room," says Heinemann. "So if you lose a battery room or have to shut it down for some reason there will always be enough energy left on the other room to sail back to harbour or do all the emergency procedures that could be involved in an emergency at sea."

Upstairs, she has all the comforts of a classic ferry, with the additional benefit of no noise or smell, ensuring a quiet crossing for passengers.

"Actually, electric motors are more powerful because we have the full torque from the bottom so that’s quite nice. You can almost drive it like a speed boat!"

From the Baltic Sea to the Swiss lakes.

The Leclanche factory in Yverdon-les-Bains as selected to power the ferry.

The battery manufacturer developed several innovations to meet the requirements of the project, in terms of safety and efficiency.

Its CEO Anil Srivastava believes that lithium-ion batteries will play a central role in achieving the electrification required by the international maritime authorities.

"Nearly 12% of CO2 emission comes from marine traffic in the European economic area. It’s 13% for cars. We need to focus on the maritime sector. This is the fastest route to tackle CO2 emissions in Europe," says Srivastava.

It's just the beginning for Leclanhe: the company already has 25 orders for electric ships, some even larger than Ellen.

"In Europe, we have taken the lead in the electrification of marine vessels worldwide," says Srivastava.

"The E-ferry project will give crucial operation data, safety data and will help set standards, not only for Europe but for the world."

The Brief: Finland works towards goal of carbon neutrality by 2035