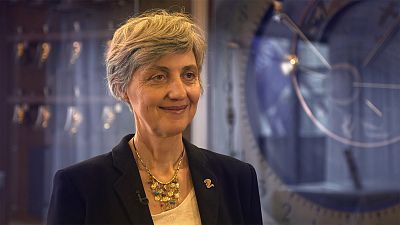 Isaac Gutierrez would like to know how much space junk there is out there?

To answer the question, we turned to Luisa Innocenti, head of the Clean Space Office at ESA's headquarters in Paris.

"Since 1957 when we launched Sputnik, we have launched some 5,000 rockets which have delivered around 8,000 satellites," she told Euronews.

"Most of the satellites are dead. They have reached their end of life. Some of them are still operational, only around 1,200. Some satellites have also fragmented and they have created smaller parts, smaller debris, and today we have some 29,000 objects larger than 10 centimetres which are monitored."

Can space junk be recycled?

Ilaria Cinelli got in touch, wondering whether all that space junk out there could be recycled in some way.

"One day we will recycle," was Luisa Innocenti's reponse.

#AskSpace: Looking for life on moons of Jupiter and Saturn

The sky is no limit: Your space questions answered at #Ask Space