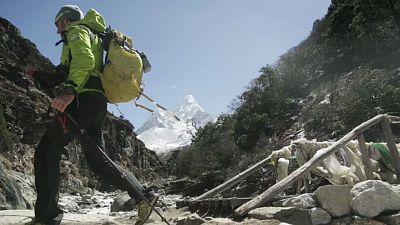 What are the mechanisms that allow us to adapt to extreme altitude and lack of oxygen? What role do genetics play?

Sherpa Everest is a pioneering project whose goal is to try to find the answers.

A team of scientists from Barcelona traveled to the Himalayas to join the expedition of mountaineer Ferran Latorre, who has just climbed Mount Everest, his 14th and final eight-thousander – the name given to the world’s 14 mountain peaks that stand taller than 8,000 metres.

It’s been a long and tough journey: “This is my temporary home: the tent, here. You try to adapt things to your needs, but, of course, you spend many hours here alone and you miss your home, your house and the people. There are times when you feel a bit down,” he says.

Latorre is one of the project’s so-called ‘guinea pigs’. At a field hospital 5.400 metres high at Everest Base Camp, doctors working on the project take samples from 15 mountaineers from all over the world and 22 sherpas. As electricty is a rare commodity, the blood samples are kept cold in the icefall of the Khumbu glacier.

From there, they are flown by helicopter to Kathmandu. They will arrive in Barcelona in the coming weeks to be analyzed at the Hospital of Santa Creu i Sant Pau.

“When we are exposed to extreme environmental situations, be it high altitudes or lack of oxygen, or hypoxia, our DNA sequence doesn’t change,” José Manuel Soria, head of Genomics at the Institute of Research of Sant Pau explains. “What does change in these situations is how we regulate those genes, that is, the expression of those genes. And that’s what we want to study.”

Samples taken in the Himalayas will be compared with those of fifty patients suffering from respiratory conditions like asthma, chronic obstructive pulmonary disease (COPD) and chronic oxygen deficiency.

“The aim of the project is to study how we adapt to oxygen deficiency – at sea level, at Everest Base Camp and after trying to reach the summit, more than 8,000 meters high – and then to compare it with people who live at Everest Base Camp year round, in an oxygen-poor environment,” explains Oriol Sibila, a pneumologist at Sant Pau Hospital.

So who will benefit from this research?

In addition to people suffering from chronic respiratory disease, it’s hoped it will help people travelling to high altitudes and mountaineers like Ferran Latorre, who says he’s not prepared to hang up his boots yet.

“Well, the truth is that after finishing the 14 ‘eight-thousanders’, I have other plans like opening up a new route on an eight-thousander, which I have so far failed to do,” he tells us. “I also want to try climbing Mount Everest’s northern slope without oxygen. And then I want to climb Cerro Torre, the north face of the Eiger… Those are all the things a mountaineer has to do before he can hang up his hiking boots.”

Whether the goal is scientific, athletic or personal, it’s an invitation for everyone to pursue their own Everest.