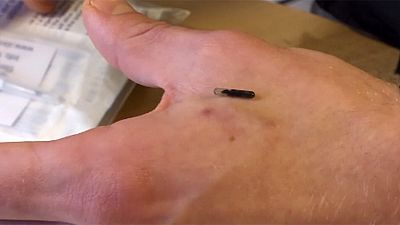 No bag, no keys, no wallet and no ID. A move of the hand simply opens doors.

Welcome to the future, or what is the present for a group of employees at NewFusion near Brussels.

Staff members at the marketing and technology company voluntarily agreed to have Radio Frequency Identification chips placed inside their hands.

Employees at Newfusion, a Belgian digital marketing firm, have had microchips inserted under their skin which… https://t.co/lln8p44Bip

The kits were bought online and a glass tube about the width of a pencil lead was implanted into their hands.

Dries Van Craen, a NewFusion developer, designed the software which is used with the chip.

So what other doors could it open in the future? Other devices he believes may be able to be connected to your own electronic chip opening up all sorts of possibilities.

“You just scan your chip and you get your personal information, your favourite Spotify track gets added to the office playlist so your music is combined to the others so everybody has their choice.

‘It brings up your to-do-list, just like a personalized dashboard. That’s one of the applications. It was just kind of a showcase to show what can be done in a few hours. So imagine if you have a few months, a few years what you can build with just that personal identifier,” he opined.

It is a technology that in the future could re-define our relationships with businesses. Think of all those cards which you carry with separate chips whether for banking or transport.

‘Your banking, you have three or four Visa, Mastercards. It’s so many cards and instead, if we can turn that around and say alright, this is my identity, that they would connect to you instead of the other way around, then we should have an ideal world,” added Dries Van Craen.

An ideal world? Far from it. “A real danger” is how one rights group described the development, a way, the group says to control workers in offices.

And even the technology does not impress every tech expert Dr Peter J. Bentley, is a professor of computer science at University College London. He doesn’t think such a permanent addition to our bodies is wise.

“Technology moves fast and actually this is the same reason why when you are doing up a house it is not clever to build in all the latest tech into the walls into the floor and everything, because in three years it is all out of date.

‘Same thing applies to stuff you put in your body in three years it is out of date. And yes there may be security vulnerabilities and that kind of thing but do you really want to start digging these things out every three years and sticking more in? Because that is where we are. It will keep on changing constantly,” he stressed.

Back in 2015 a Swedish company had already implanted similar chips in some of its employers to get access to the office or being able to use the photocopier.

In Europe, previous experiences with under-the-skin chips were done in Spain in 2013 where clients in a bar were encouraged to pay for their drinks throughout RFID chips. The experience was not conclusive and it was then abandoned.