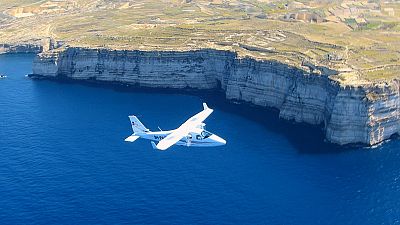 Just one plane helped the Malta School of Flying, founded in 2004 by two men, to now employ 20 people.

In 2012 the partners needed to grow. A 395,000 JEREMIE, (Joint European Resources for Micro to Medium Enterprises), loan allowed them to build a new hangar, improve their small fleet, and above all, buy a twin-engined plane. At a stroke activity was diversified, and turnover jumped 35 percent.

“Now, thanks to the new plane, we can deliver training towards the commercial pilot’s licence, multi-engine ratings, instrument ratings, plus also use the aircraft for Maltese public transport flights and also to nearby countries,” said CEO Patrick Fenech.

Patrick is not stopping there. In two years time he wants another twin-engined plane. One of the keys to success has been the loan that allowed the expansion, but the easy terms of the loan were also critical.

“Our interest rate was reduced by one percent, and the collateral required was only 32.5 percent, which is one third of traditional loans,” he adds.

Just how does the JEREMIE scheme work? Who is it designed to help? What type of aid does it offer SMEs (small and medium sized companies)?

JEREMIE allows EU member states to use cash from the European Regional Development Fund to give companies access to a number of credit streams and financial tools. As a revolving fund, it is designed to be self-sustaining – up to a point.

Dr. Ian Borg, Parliamentary Secretary for the EU Presidency 2017 and EU Funds, explained: “When the loans are repaid, the money goes back to this fund, and other SMEs can re-use that fund which is reinvested in the SMEs, in further SMEs.”

The 10 million euros invested by this initiative in Malta have been able to leverage a further 42 million for investment in the country’s SMEs.

“So far, we have some 551 loans guarantees which have been signed, and around 492 SMEs who have benefited from this initiative,” said Borg.

Patrick Fenech is in no doubt as to what he owes his rosy outlook: “My keys to success are… having a solid business plan… being innovative… and diversification.”