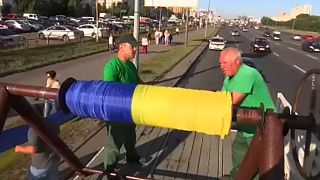 A Ukrainian flag measuring 2,700 metres was unveiled Thursday in Kyiv.

The flag represents the country's statehood with every 100 metres representing one year of independence from the Soviet Union.

The flag is the largest ever recorded in the country, according to the Ukraine Book of Records.

The nation will celebrate Independence Day on August 24.