“My wrists were bound together with iron chains,” said the man who calls himself Abu Firas. “They put me onto an iron bar under the ceiling so that my feet were two centimetres above the floor.”

“They hung me on my hands from the ceiling,” Abdul Karim Rihawi told Euronews.“They beat me with an iron stick.”

“My finger felt like it was the size of a football,” said Yazan Awad. “I felt my arms were very long because my shoulders became dislocated (by this torture). I looked and saw my arms far away. “

Sometimes, when emotions run high, Nahla Osman takes her clients for a walk alongside the river Main. Osman was born in Germany to parents from the Syrian city of Aleppo. She helps victims of torture. She and her brother run a law firm in the German city of Rüsselsheim.

She has compiled hundreds of witness reports detailing torture on a massive scale inside Syrian prisons and will file criminal complaints using the principle of universal jurisdiction which Germany enforces. 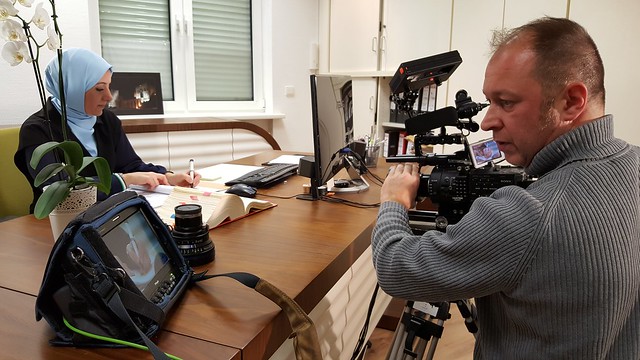 Why have so few survivors decided to go to court?

“Many are still waiting for family reunification,” Osman told Euronews. “If family members are still in Syria, those in Germany are afraid of taking legal action. If they trigger a case here, the Syrian regime would imprison or kill their relatives.”

Euronews reporter Hans Von Der Brelie met two people who say they survived Syrian prison torture: co-founder of the Syrian Human Rights League Abdul Karim Rihawi, and a civil rights activist from Damascus, who didn’t want to be named. He calls himself “Abu Firas” and is speaking out for the first time.

“They had an electric instrument and they put electric cables under my toes, under my arms and on my thumbs,” Abu Firas described. “You still can see traces from that procedure on my thumbs. Then they turned the current on and off, on and off, again and again.”

Abu Firas wants to submit his case to the German public prosecutor and wants arrest warrants to be issued for high-ranking Syrian officials.

“They tortured me with the car-tyre method, squeezing my body with bent arms into the tyre up to the knees so I could not move,” he alleges. “They hit me with a piece from a tank engine, a kind of a V-belt… After the first two blows, my body felt paralysed. I just hoped to see the son my wife was pregnant with.”

“Reconciliation with all the sectarian groups in Syria is possible, yes, but not with this criminal regime,” Firas said.

Abu’s friend Abdul Karim Rihawi invited Euronews to the hotel room he’s called home for more than two years. This is where he has been gathering evidence with his civil human rights network, which is still working undercover in Syria. Euronews asked if the photos shown during our visit included people who had tortured, he replied: “A lot of them, many of them: torturing… a lot of crime… they committed a lot of crime… For that reason, we are asking the German authorities to take action again.

“We make a list of these murderers. Until now we have six lists, we presented this lists to the German government… There are at least 7,000 war criminals (from Syria) in Europe but the highest number of them (are residing) in Germany, especially they arrived after the massive arrival of refugees in 2015.

“That’s also what makes me very angry: they are enjoying their life here in Germany and they have all the benefit from the law and they are war criminal.”

The war crime unit at the German Federal Office of Criminal Investigation told Euronews that they have 4,300 reports from Syrian and Iraqi survivors, resulting in 43 person-related investigations. But it’s difficult to collect hard evidence.

“Torture in Syria is very normal, very systemic,” said Abdul Karim Rihawi, co-founder of the Syrian Human Rights League. “It is an abnormal thing if you go to the prison and nobody tortures you… They beat me with cables, with their hands, with their legs… When they get us to the toilet we had to pass through the dead bodies on the ground. Oh my God, that was really terrible…All the night you still hear the voices of the people begging or yelling or shouting from torture… I was hearing the voice of a child: maybe he was 14 or 16 years old, he was seeking for his father: ‘please – I need my Bab (daddy), my Bab’.” 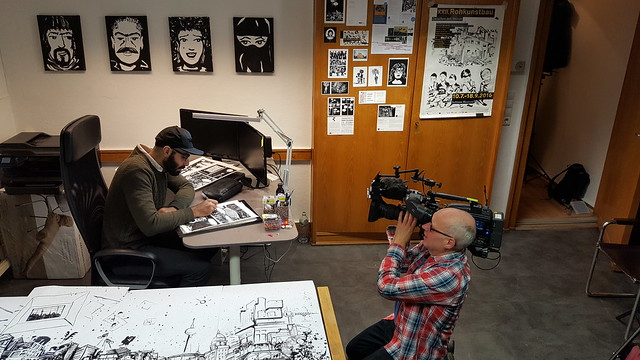 Syrian artist Hamid Sulaiman invited Euronews to his Berlin studio. He too is familiar with Syrian prisons from the inside. After his release, he was granted asylum in Paris. Today he lives between Germany and France. Sulaiman is the author of “Freedom Hospital”, a graphic novel about the start of the civil protests in Syria, in 2011. His book is dedicated to a former friend, Hussam, who was allegedly tortured to death.

“We were with each other at the start of the Arab Spring,” Sulaiman said. “We shared the dream of freedom in a better country. Me, I left Syria, and Hussam was getting ready to leave Syria when he was arrested … and he was killed in prison. Five days later, they called his mother to come and get his body.

“I am a survivor, the others are dead. I have a duty to tell their story.

“I gave a lot of thought about how to present the violence in this book, because there are quite a few people who will say: you did not have to talk about the blood and violence to talk about Syria .. but at the same time I said to myself: that’s the reality.”

Next, we headed to an organisation tracking war criminals around the globe: the European Center for Constitutional and Human Rights where we met prominent Syrian human rights lawyer Anwar al-Bunni, and Syrian civil rights activist Yazan Awad, both torture survivors.

Hamid Sulaiman’s artwork is displayed at the centre. Anwar and Yazan have filed criminal complaints with the German Federal Prosecutor through their legal advisor Alexandra Lily. They want to hunt down those who gave the orders.

Lily spoke to us about the next step in the case:

“Personally, I met the head of (the Syrian) National Security Office and told him about the torture”, said Anwar. “He knows that… because I was in detention, in his detention,” said Anwar.

The next person we met during our investigation, Yazan, is listed by the German federal prosecutor as ‘key witness number 24’. Yazan had organised youth protests during the ‘Arab Spring’. In November 2011 he was arrested and says he was tortured so badly, that he confessed to crimes he never committed – such as having killed the prime minister of Lebanon. 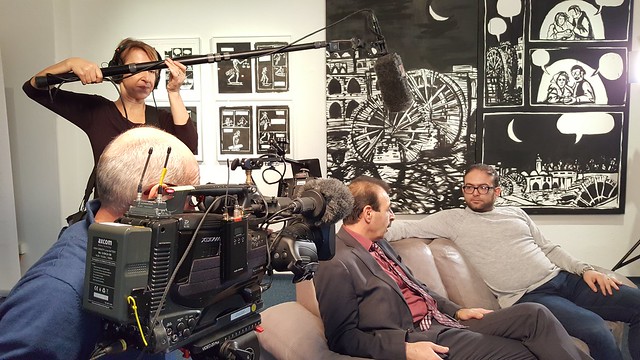 “I told the torturer: I will confess to everything, I will even testify against my own mother,” said Yazan. “He replied: we will bring her and we will see. He went and after 15 or 30 minutes he told me: we brought your mother, but I knew he was lying. I started to cry: I said, what, my mother, where is my mother? And he punched me in the face. The torturer said: okay you will see what we will do with your mother – but I was blindfolded. The psychological pressure on me was huge – I collapsed because they abused an innocent women. I did not know her, maybe she was just one of the prisoners in Jaweyeh. They brought her, she was inside the room and it was obvious that two people were torturing or raping her because I recognised several voices. I collapsed… I told the torturer: I admit to whatever you want but stop torturing her, stop raping her. He told me: The guys have not finished with her yet.

“They had been torturing the other prisoners before, but all five or six of them came to me and tortured me together. They tortured me, tortured me… From my point of view, I thought I was already dead. From their point of view, they pretended that I am a man attacking them. But how can a man forced to strip attack his torturers? They said to me: You think you are a man? We will show you that you are a woman. They continued beating me and the torturer who was using the butt of the gun for hitting me, suddenly turned the gun around and put the barrel into my body from behind and then he ripped it out again. When he took it out, the iron sights on the gun barrel destroyed the anus.”

The International Criminal Court in the Hague could not take action against Syrian officials because Russia and China used their veto. But Germany and about a dozen other countries have implemented the principle of universal jurisdiction and started investigations on a national level.

“First message we want to send it to the murderers and criminals in Syria and in whole the world in fact: impunity time is finished,” said Anwar. “Impunity is not allowed anytime, anywhere. Be careful! And: Justice is waiting for you! Without justice, there is no Syria. No country in the whole world can (be) built without justice.”

Al-Bunni has some top-level appointments in Brussels, with the European Commission and the Belgian government. He wants to convince more EU member states to use the tool of “universal jurisdiction” too: No safe harbour for torturers, anywhere.