Since the end of last year, Poland has been ruled by a populist right-wing government trying to get a hold of public media and the Constitutional Court. But student Artur Sierawski has something to say about this.

The situation in Poland today worries me deeply. I am a young historian and therefore I know about the potential consequences of such a situation. I am worried.

Artur and his friends have a bad feeling. They fear that Polish democracy and rule of law are under threat.

A right-wing shift is splitting Poland: 42% back the ruling “Law and Justice Party”, PiS, while 46% are for the civic rights movement “Committee for the Defence of Democracy”, or KOD, of which Artur Sierawski is its youth head.

Today he prepares a photo update for their social media site.

Artur Sierawski, Committee for the Defence of Democracy, KOD:
“We take photos in front of historic monuments and statues because we want to show that this national heritage is not exclusively owned by one political party – but that it belongs to us all, to all Poles.”

This current protest movement is anchored in the middle of Polish society. Tens of thousands of citizens take to the streets following the calls from Arthur and his friends.

The KOD launched in November 2015 when Poland’s right-wing majority attempted to replace three constitutional judges with persons affiliated with their conservative viewpoints.

Artur and his friends were appalled by this attempt of the ruling party to take over the Constitutional Court.

Artur: “The situation in Poland today worries me deeply. I am a young historian and therefore I know about the potential consequences of such a situation. I am worried.”

Adam Lewanski, Committee for the Defence of Democracy, KOD:
“What upsets me most is the fact that the government puts Poland onto a collision course against the European Union. Our EU membership is Poland’s biggest success in the past 25 years.”

The new government’s involvement in public media is another controversial topic. Top professionals were replaced by right-wingers. Euronews meets one of the sacked journalists at his home.

European and international journalist associations protested against the politically motivated firings. The EBU expressed dismay and the European Commission is investigating the situation.

Maciej Czajkowski, former journalist, TVP: “We are jobless now. First day it was just two of us: the head of the news and myself… next day it was a tsunami… The country which wants to be recognised as a democratic country must provide operational independence of media, especially public media. If we have direct intervention of the politicians in the programme making, I don’t think we can call that country democratic anymore… It is a bit again scary – because it’s becoming typically… Polish radio and television it will become another government ministry… Ministry of Propaganda.”

In a Warsaw cafe euronews interviews Jaroslaw Kulczycki, another top journalist who was suddenly let go. He works here on his laptop, sending CVs around the country. Until recently, Kulczycki was a known face on TVPINFO, a popular public news broadcast.

Jaroslaw Kulczycki, former journalist: “Freedom of speech in Polish public media is at danger – they’ve been showing for quite some time now a clear political bias. The ruling party is changing the rules of the game. It’s overthrowing the table. It’s implementing its own rules without any discussion. We are in the middle of a serious revolution.”

Some of the coffeehouse customers listen in and not everybody agrees. A woman introduces herself as a retired judge – and supporter of the ruling “Law and Justice” party.

Kamila Thiel-Ornass, supporter of Polish Law and Justice party: “Before the governmental change the public media were clearly biased, presenting left-wing liberal opinions corresponding to the viewpoints of the former government. That was not fair-play… so I abandoned TV. I have lived without it for three years. To stay informed I switched to the internet where I can choose for myself.”

We meet Artur again. The civil rights activist is not in the best of moods. He’s going to have a chat with Ewa Kubasik, a supporter of the ruling “Law and Justice” party or PiS.

Polish society is split – and usually anti-PiS and pro-PiS supporters avoid speaking to each other. Euronews invited the students to have an exchange of words.

Ewa Kubasik, supporter of Polish Law and Justice party: “I was brought up to be a patriotic citizen. I dream about a strong, independent and sovereign Poland – being part of the European Union structures but defending its own strong positions and viewpoints there. I trust that PiS will guarantee me these things.”

Artur: “But this current government violates our constitution… The former liberal majority appointed three judges to the Constitutional Court, according to the rules. But today’s president refuses to sign their nomination, disregarding his democratic duty.”

Ewa: “The former liberal parliament somehow elected these judges at the last minute, before they left power. This was against good manners. Today’s government, led by the PiS, simply implemented their programme which was clear before the elections. People voted for it. PiS and their government have the right to change rules and laws. They are not breaking the constitution.”

Artur: “No one doubts the outcome of the elections. But the fact that the right-wing PiS got a majority in both chambers does not authorise them to violate the law and to restrict civil liberties. But they do: they violated the liberty of public media, they transformed it into “national media” instead, led by a politician linked to the ruling party.”

Blocking the system of checks and balances

Euronews meets Marek Chmaj, a leading Polish expert in constitutional law who had just finalised a report for the Council of Europe.

There is an ongoing investigation to determine if Poland’s right-wingers – including president Duda – are violating European standards by blocking the democratic system of basic checks and balances.

Marek Chmaj, constitutional law expert, Warsaw: “This position of president Duda is very unnormal, because in democratic states (there) must be (a) separation between judicial power on one side, and with executive and legislative power. Now, with (regard to the) separation (of powers), we have (a) very big problem – and this is a constitutional crisis. Democracy is a play, like football… but without the rules, play does not make sense.”

Leaving the capital Warsaw, it’s an one-hour journey to a tiny village where Artur lives with his parents.

The 22 year old is locally involved too: a member of the volunteer fire brigade, he won a Red Cross rescue medal.

…But how to rescue Poland?

Artur: “Our civic rights movement should not transform into a political party. It should stay a guardian of the constitution and Polish democracy.”

Mariola Sierawsa, Artur’s mother: “We – my husband and me – voted in the past for the “Law and Justice” party. But this was a mistake. Our political conviction is completely different now.”

Marek Sierawski, Artur’s father: “We are worried that something could happen to our son. But I believe that the ruling government is still a democratic one – and that nothing serious will happen to Artur. Nevertheless, we check that he gets home safely.”

Artur is a go-getter of a character who takes on difficult tasks… In his free time he jogs and rides his bicycle. Recently he came in third in a 24-hr bike race.

But current times are hard: there is little leisure. Rather, he sets out on a marathon train travel, criss-crossing Poland.

Artur: “I travel Poland from town to town – to meet all those young people backing our Committee for the Defence of Democracy. I want to exchange ideas… and we need to prepare further actions.”

Working closely with the Council of Europe the European Commission has launched an in-depth inquiry into whether or not democracy in Poland is in peril.

Results of the investigations will be known in March. 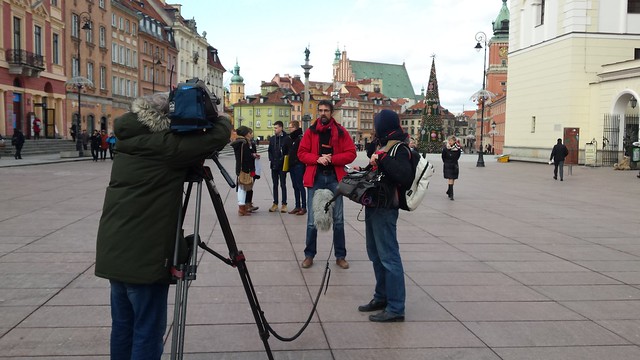