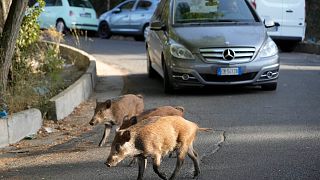 The Italian government is planning a mass cull of wild boar, which are currently terrorising the country’s capital, Rome.

The city has been under siege from increasing numbers of the wild pig, which have been making their way into the city, eating from rubbish bins and even attacking local residents.

The animals have been resident on the outskirts of Rome for years, but accounts of incursions into the city have increased in recent months, as the animals forage for discarded food.

While the disease has no impact on human health, it poses a risk to farmed animals.

How have wild boar been affecting Rome?

The farmers’ association, Coldiretti, estimates that around 23,000 boar live on the outskirts of Rome. The wild pigs are often seen in the Lazio region to the north of Rome and are known to enter the city to rummage through rubbish bins in search of food.

In response to the cases of swine fever that have been discovered in the Insugherata Nature Reserve, an 800 hectare wildlife area to the north of the city, several areas have been declared “red zones” by health officials.

This anti-boar measure has seen rubbish bins taped off to dissuade hungry boar and picnics banned.

This anti-boar measure has seen rubbish bins taped off to dissuade hungry boar and picnics banned. In a statement released on Monday (9 May), Junior Health Minister Andrea Costa declared that a "large-scale cull" was necessary across Italy to reduce escalating numbers.

The first case of swine fever was detected in the Piedmont region in the north of Italy in January and authorities are keen to reduce its spread. The deadly disease has killed thousands of wild and farmed animals in countries such as China and Russia, and millions of animals have been slaughtered worldwide to contain its spread.

Have wild boar been attacking people?

While wild boar attacks are rare, a number of incidents have been reported in the Balduina region to the north west of the city. On Sunday (8 May) a woman was taken to hospital after she was attacked by a boar as she took out her rubbish.

"The animal was on top of my head," she told Italian paper La Repubblica. “If my dog had not defended me, I don’t know what would have happened.”

The wild boar was a sow with a litter of seven piglets, which may have made it more likely to attack if it felt that its young were being threatened.

As #Rome prepares to cull its wild boar population, amid concerns over the spread of swine fever, a large number of #cinghiali were photographed on a street in the northern Balduina district on Tuesday night. pic.twitter.com/A6PmDI7nim

The case has led to residents in Balduina and six surrounding districts to adopt an 8.30pm curfew to protect people from further attacks.

“Boars have invaded our cities, our parks and our neighbourhoods,” said Costa, in response to the escalating issue.

“I believe it is the right moment to consider an important plan of selection and culling to reduce their numbers.”