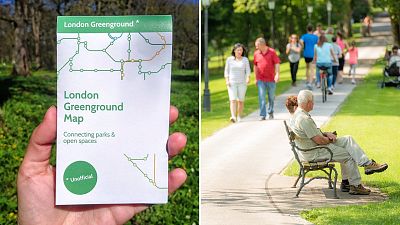 We’re all bound to have seen the iconic London tube map, no matter where we live, but did you know about its green alterego?

Graphic designer Helen Ilus is the artist behind the London Greenground Map. It is structured like the original but, instead of connecting tube stations, connects green spaces across the capital city.

Ilus launched the map in 2020 and has attracted a lot of attention ever since.

“What I like about this project, and it’s the best one I’ve had so far, is it’s a very simple idea,” she explains. “It’s a positive infographic, and it actually enables you to take action.”

Ilus is now based in the Estonian city of Tallinn, but she’s an ex-Londoner herself. She says she noticed how many green spaces there actually were in the big city and wanted to encourage people to get out and about.

“There’s so much greenery around, but London is so busy and you think in terms of transport lines, you might not know that they’re there because you’re so busy commuting.”

There has been an increased interest in the map during lockdown, she says, as people are forced to stay local and discover their area in a new way. “They can see the whole city in a different way. And that is what I’m aiming for.”

The green movement is spreading

Ilus feels as if there is a lot of room for green innovation in graphic design. “I’d like to see more of environment and green space graphics, and especially something that would change behaviours.”

Having just launched the Edinburgh Greenground map, she would love to see the idea rolled out across many different cities in Europe and is thinking of crowdfunding to make it into an app. Currently, a paper version of the Greenground Map is available for purchase. A free PDF version is also available online.

The London PDF version has been downloaded over 50,000 times.

Unfortunately, the car continues to be king in Europe. There is an average of 30 cars registered per 1,000 inhabitants in the EU, according to data in 2019. Germany has the most, followed by Italy and the UK.

In the UK, the amount of cars on the roads has doubled in the past 25 years.

James Austin, London Director of the British cycling and walking charity Sustrans, is pleased with the news of a green map.

“Changing the way we travel can play a surprisingly big role in helping to protect the environment. Over the last 50 years, the volume of motor traffic on our roads has dramatically increased, with motor vehicle miles travelled in 2019 more than ten times higher than in 1949. If the UK government are to meet current targets on reducing harmful emissions, walking and cycling need to be prioritised.”

“To help everyone travel more sustainably and reduce harmful emissions, we need to make it easier for more people to replace trips made by car with walking or cycling,” he concludes.