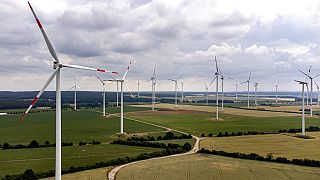 Oil prices surged nearly 5% and stock prices dropped after Russian President Vladimir Putin recognised the independence of rebel-held regions of Ukraine on Monday evening, raising fears that a full-scale invasion was near.

Russia is a major energy producer and the tensions over Ukraine have brought wide swings in volatile energy prices, on top of the inevitable risks of a broader conflict.

Oil prices already had surged recently to their highest level since 2014. The price of Brent crude, the standard for international oils, gained about $4.50, or nearly 5%, to hit about $98 (€86) per barrel.

The US and European Union condemned Russia and prepared to hit back with sanctions. On Tuesday, Germany suspended the approval process for the Nord Stream 2 pipeline that would bring Russian natural gas to Europe. Western powers have feared Russia might use skirmishes in Ukraine’s eastern regions as a pretext for an attack on the democracy, which has defied Moscow’s attempts to pull it back into its orbit.

Rising energy prices and fears of a Russian invasion of Ukraine are making European leaders think hard about energy security, particularly their decades-old reliance on Moscow for natural gas.

The crisis shows Europe's vulnerability after years of limited progress in completing an “energy union” - a 2015 vision to allow affordable gas and electricity to flow across borders while diversifying suppliers and reaching climate goals.

As renewables like solar and wind are slowly built up and coal and other fossil fuels are phased out, Europe still needs natural gas, and it's dependent on Russia to get it.

With gas reserves low and concerns a war could interrupt pipeline flows from Russia, the EU is focused on getting liquefied natural gas, or LNG, by ship from the United States, Qatar, Algeria and elsewhere until renewables catch up. Environmentalists fear making that even a short-term priority could set back Europe's goals to move away from fossil fuels.

Doubling down on renewables would help reduce dependency on Russian gas, EU Energy Commissioner Kadri Simson said on Monday while reiterating that energy security was critical. An advisory group to coordinate the EU’s gas supply security was meeting on Tuesday because “it’s important that contingency plans are ready for the worst-case scenario," she said.

Speaking to Spanish politicians on a visit to Madrid, Simson briefed them on the latest security of supply developments and the situation in Ukraine, but said Europe was at a "crossroads" and needed "more unity than ever."

We are at a crossroad in EU energy security & need unity more than ever.

The 27-nation EU is “on the safe side for this winter” but doing “everything possible to get rid of this dependency,” European Commission President Ursula Von der Leyen said on Saturday at the Munich Security Conference. She accused Russia’s state-owned gas giant Gazprom of “deliberately trying to store and deliver as little as possible while prices and demand are skyrocketing.”

“We are aware about the low resources of gas in European countries," he said.

In a conflict, security analysts say Russia would have little interest in a total gas cutoff that would deprive it of revenue and give Europe a further incentive to find other sources of energy.

Countries like Lithuania and Poland have managed to reduce Russian gas imports. But Russia accounts for more than one-third of the EU’s supply, and its dominance is entrenched in the Baltic states, Germany, Italy and parts of southeastern Europe.

The core issue is that the 27 EU countries retain substantial control over energy policy. Clashing regulations and standards make transport of gas from one country's system to another difficult, even when the network to do it actually exists. Energy companies moving gas across borders, for example, are sometimes charged tariffs more than once or twice.

“It’s in moments of crisis that we see the need for market integration and enough infrastructure from a security and procurement point of view,” he said, adding that the focus on renewables shouldn’t neglect the role of natural gas.