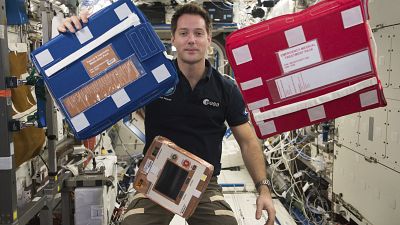 French astronaut Thomas Pesquet has spoken out about his concerns for the future of the planet as he wraps up his second mission aboard the International Space Station.

From forest fires to hurricanes, Pesquet bore witness to the natural disasters on Earth over the past six months from a very special vantage point.

Compared with his previous mission, Pesquet reveals he "had never seen anything like this before".

"Definitely, the hurricanes, seen from space, and the forest fires, I had never seen that before, especially on my previous mission," he says.

"Forest fires of an incredible size, with plumes of smoke, columns of smoke that you can see from space for days and days and days, it was impressive to think of the energy that was released and the damage that was obviously caused, for the people who were unlucky enough to be in the path of these fires."

Pesquet said seeing the Earth from above has strengthened his awareness of its fragility.

Pesquet adds that seeing the Earth from above for a second time, five years apart, has strengthened his awareness of its fragility.

"The pollution of rivers, or the erosion of sediments along the rivers that reach the sea and destroy the arable land upstream. Air pollution, melting glaciers, cutting down the Amazon rainforest, all of this can be seen from the space station," he says.

Expressing his fears ahead of the COP26, the astronaut explains that seeing these changes over time "marks you for life".

"Along with the accumulated data and not just the observations from the space station, you cannot feel anything but concern."