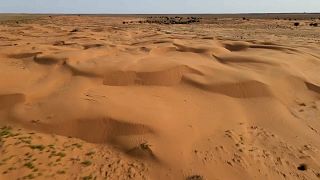 Europe's landscape is under threat as the climate crisis worsens, with desertification sweeping across the driest and hottest parts of Russia.

In the southern republic of Kalmykia, sand has replaced the steppe.

Severe drought and overgrazing have combined to destroy what was once fertile landscape.

The worsening climate crisis has only been exacerbated as temperatures in parts of Russia rise to twice the global average.

"There's overgrazing by cattle which exceeds all norms; and most importantly, the pastures are not rejuvenating," he says.

Kalmykia, a sparsely populated republic, boasts a humble population of approximately 300,000 across its 76,100 square kilometres of territory.

However, the soaring temperatures and unrelenting winds have destroyed what was once productive farmland. Last year, the lack of rain and food resulted in catastrophe as thousands of livestock perished.

In a bid to support local farmers, Kalmykia's regional government has pledged €7 million to avoid a repeat of that disaster.

One local herder, Ulyumdzhi Mukabenov who was forced to watch his livestock suffer from lack of ration said, "it was horrible to look at the cattle. They would look for grass but there wasn't any at all".

While Russia has pledged to reach carbon neutrality by 2060, natural disasters continue to strike. The country has recently dealt with numerous catastrophes such as forest fires and floods on account of climate change.

This past June was the second-hottest in Russia's recorded history.

In a press conference with the state-run TASS news agency, Roman Vilfand, the head of research at Russian meteorological service Rosgidromet said that major cities were significantly impacted by the soaring temperatures. St. Petersburg experienced its hottest June on record and Moscow, its third-hottest June.

If temperatures continue to climb as predicted, 2060 might prove to be too late for Kalmykia and many parts of the planet threatened by desertification.

What would a 90% loss of global biodiversity mean for the planet?