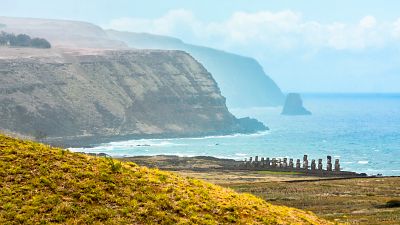 When Europeans first arrived at Easter Island, they were surprised to see Indigenous people drinking directly from the sea. Along with the island’s famous giant Moai statues, this quirk of nature was added to the local list of mysteries.

Researchers later learned that the drinking water supply came from freshwater ‘coastal seeps’. But this month, they uncovered even more.

With the help of drones, researchers gained a deeper understanding of how the people of Rapa Nui historically harnessed the water supply to nourish local communities. This research may even pave the way for future studies on water, drought and drought prevention.

According to Robert DiNapoli, a postdoctoral research associate in environmental studies and anthropology at Binghamton University, rainwater at Easter Island sinks directly through porous bedrock into an underground aquifer (a body of porous rock or sediment where water is concentrated).

This then surfaces along the coastline as something known as ‘coastal seeps’ — pockets of freshwater that trickle into the ocean.

The study, conducted by DiNapoli and fellow researchers at Binghamton University adopted modern technology to locate pockets of this coastal seep, allowing for a more systematic approach to finding fresh water.

The researchers utilised drone technology with thermal imaging cameras to identify the coastal seep, a practice used in similar studies in places such as Hawai’i.

DiNapoli explains that at some of these locations on the shoreline, there is so much water coming out of the seeps that it's basically fresh. “It's somewhat salty, but not unpalatably salty… It's just not the best-tasting water, basically."

Anthropologists found that in addition to harvesting freshwater from pockets of coastal seep, Rapa Nui’s inhabitants built underwater dams in the ocean to keep fresh and seawater separated and constructed wells that redirected water from the aquifer before reaching the sea.

The island is not home to any rivers or streams and has just three small crater lakes that can dry up through periods of drought. This means freshwater is a scarce necessity on the island.

"They were faced with a very difficult place to live, and they came up with these interesting strategies for survival,” says Dinapoli. It provides an interesting example of how the people there responded to the constraints of the island, he adds.

Places such as Easter Island are already prone to droughts due to limited supplies of fresh water. This makes them among the communities most vulnerable to water scarcity as climate change exacerbates such natural phenomena.

The results of the present study will serve as the basis for a spin-off research project, funded by a National Geographic grant, which seeks to understand how coastal seeps function throughout periods of extended drought.

The Binghamton University researchers performed their previous study in a several-year drought, which led two of the three crater lakes on Rapa Nui to dry up.

"We identified these coastal seeps all around the island. That suggests that when the island experiences these drought events, the seeps are one of the last water sources to be affected by it," DiNapoli said.

As coastal seeps were still present despite the dry conditions, researchers have reason to believe that water may remain in underground aquifers for extended periods of time before seeping into the ocean.

Annually, 55 million people are affected by drought and four per cent of the global population experiences water scarcity. The UN has set a Sustainable Development Goal, that says all people must have access to water and sanitation by 2030.