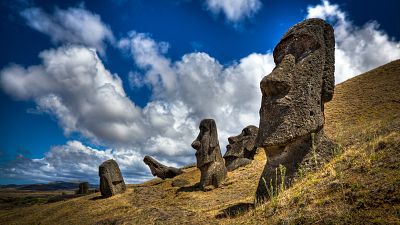 Equipping heritage managers, governments and the public with the right data will help conserve our past.

What do Easter Island, Scotland’s Edinburgh, and the Tanzanian port of Kilwa Kisiwani have in common? They still bear the statues, the castles, or the ruins that testify to humanity’s rich past. But these iconic sites also face an uncertain future, as the effects of climate change are threatening some of the most important building blocks of our culture and history. Like them, thousands of man-made heritage sites around the world are increasingly facing more intense weather events, creeping sea-level rise, or repeated episodes of heat. Some heritage sites might disappear even before we discover them. Now, scientists, cultural managers and policy makers are increasingly looking at climate data to understand these changes and make our past more resilient to the future.

“There are several impacts of climate change that are very worrying,” says Dr. Adam Markham, deputy director of the Climate and Energy Program at the Union of Concerned Scientists. Major floods could affect over 10% of the more than 1,200 UNESCO World Heritage properties by the end of the century, according to recent research, while submersion and coastal erosion could impact almost all the Mediterranean UNESCO coastal sites.

“Both extreme events and slowly evolving phenomena related to the water cycle will have a big impact on heritage,” says Prof. Cristina Sabbioni, senior researcher at the Institute of Atmospheric Sciences and Climate (ISAC) in Italy. “Leaching and erosion because of precipitation could affect even the most durable materials, including marble. We predict an increase in leaching in central and northern Europe, the Italian Alps, and northern Spain.” Increased air humidity in the future could also see more crystallisation of sea salt in the atmosphere, which Prof. Sabbioni says could damage all materials and surfaces. “We have seen an increase of crystallisation all over Europe.”

Sea-level rise is a threat to heritage in regions such as the Mediterranean. “Cities like Ravenna in Italy or Arles in France will be threatened in the future,” says Dr. Markham. “Ancient Greek and Roman remains on the island of Delos, Greece are being damaged by the sea, as increasing water levels affect them from underneath.” By the end of this century, Venice, long-time affected by a combination of rising seas and sinking subsoils for decades, could face higher water levels, anywhere between 11 to 110 cm. The city’s 78-flood barrier system, Moses, might not be able to handle a rise above 60 cm.

In the Northern Hemisphere, it is likely that hurricanes will intensify as oceans are warming, while bringing higher wind speeds and causing higher storm surges with the rise of sea-levels.This could make cultural heritage more vulnerable. Hurricanes have already affected cultural sites - in 2012, Hurricane Sandy damaged the Statue of Liberty and Ellis Island, causing USD 100 million in damages. More subtle climate shifts, like rising temperatures and changing rainfall patterns could also take a toll on heritage, undermining buildings’ structures. For example, thawing permafrost - the always frozen subsoil - in Northern regions could destabilise buildings, their foundations and other infrastructure.

Wildfires are also a concern, explains Dr. Markham. “Many areas of the world, including the Mediterranean region, Australia, North America, and South Africa are experiencing more wildfire activity. In the US, the wildfire season is maybe five-six weeks longer than 50 years ago, while fires are larger and more intense.”

Heritage is not just buildings and statues. Across the Arctic, a region that is warming twice as fast as the global average, more than 180,000 archaeological sites in Greenland, Lapland and Russia may be threatened by the subsoil thawing and warming soils. “This increases degradation,” says Dr. Markham, “as bacteria activity consumes more organic material underground. The loss of Arctic sea ice, which also protects the shore from winter storms, also contributes to the erosion of these sites. We are losing archaeology we haven’t seen or even found.”

“There is a strong relation between temperature and preservation,” says Dr. Jorgen, senior researcher at the National Museum of Denmark, who has been working in Greenland, analysing how permafrost thaw affects archaeological artifacts. “Temperatures in Greenland are now 3 to 5ºC above historical averages. At the same time, soils are also drying; if the soil is drier, more oxygen gets underground, triggering bacteria. But compared to the effects of coastal erosion and storms, impacts from microbial degradation can take decades to show.”

“One of the major gaps in protecting cultural heritage is that there are very few national climate change plans that include specific measures for cultural heritage, which can make sites even more vulnerable,” says Prof. Alessandra Bonazza, researcher at Italy’s Institute of Atmospheric Sciences and Climate (ISAC), who has been working on EU projects focused on understanding climate change damage to cultural sites.

To help practitioners understand that potential damage, scientists have been stepping up efforts to get the needed climate data to cultural heritage managers, policy makers and authorities. “Demand for data is huge,” says Stijn Vermoote, head of user engagement for Copernicus Services at ECMWF. “There are many questions related to heritage and how climate change and atmospheric composition would influence it. Internationally, organisations like UNESCO want to have one reference, the type of data that everyone can use, while site managers might need applications tailored for a certain place.” ECMWF is linking local consultants with research institutes that can help translate climate data, which can then be used downstream.

Data used for other climate-related activities can be easily used in the case of cultural heritage, according to Vermoote. The Copernicus Climate Change Service (C3S) provides past data and future projections for sea-level rise, risk of extreme events or flash floods, as well as for factors influencing cultural and natural heritage more indirectly, such as soil moisture and land cover. For example, research on how sea surges and storms could affect Dublin using C3S data could be used for disaster risk reduction for UNESCO heritage there. Heritage site managers can also use data from the Copernicus Atmosphere Monitoring Service (CAMS) on atmospheric composition, depositions and wildfires could potentially be used to derive information to support conservation and protection of the built environment and for example understand to what extent soot from traffic or acid rain affects their buildings. In Athens, Copernicus worked with the Academy of Athens to develop DiscovAir, an application which tourists can use to track daily real-time information on allergens, ozone levels, UV radiation and other data. “This eventually could be used for other heritage sites as well,” says Vermoote.

An upcoming online GIS platform will also provide future projections for climate change impacts on heritage, according to Dr. Bonazza. “We are using satellite data, particularly via C3S and CAMS, to inform risk assessments, including hazard mapping, and we are producing a support tool for decision making which would help decision makers rank the vulnerability of a particular site,” says Dr. Bonazza.

“We don’t have the luxury to first lose our cultural values and then fix the situation, we need to take action now,” says Dr. Evangelos Gerasopoulos, director of the Hellenic Group on Earth Observation (GEO). “A few years ago, massive wildfires in Greece got very close to the ancient site of Olympia, making us realise how much extreme events can threaten ancient monuments.

But we saw that earth observations can really help. Dr. Gerasopoulos is working on the recently launched Urban Heritage Climate Observatory, which aims to boost collaboration between the scientific community, authorities and urban planners in order to make cities and their heritage more resilient to climate change. Helping urban and heritage managers understand and use the data is key to the project. “There is a lot of observational data we can use – satellite, in situ, crowdsourced data; but we also need to reach a common language.”

At the World Heritage Committee meeting this month, the Union of Concerned Scientists is working to convince officials to standardise a climate vulnerability index that helps heritage managers quickly assess the risks that sites are facing. “The index works for natural, cultural, and archaeological sites, as well as for cities and rural areas, and can be used to assess adaptation plans,” says Dr. Markham.

Monitoring heritage sites is essential for keeping track of climate change impacts and adapting, Prof. Sabbioni thinks. “Researchers and cultural heritage managers need methodologies for monitoring large areas in more detail. But advanced technologies make this possible.” One example is Pompei, where a recent public-private partnership will use AI, Big Data, drones, cloud systems and other technologies to protect cultural heritage from both human and environmental risks, and help keep visitors safe.

While still in its early days, protection of cultural heritage from climate change impacts is slowly climbing up on the international agenda, with the G20 Summit or the European Commission increasingly paying attention to the importance of the past in the changing future. “Cultural heritage can also give us answers,” says Dr. Leissner, scientific representative for the Fraunhofer Institute in Germany and chair of the EU working group for Strengthening Cultural Heritage Resilience for Climate Change. , “it can tell us how our ancestors adapted to climate change, what kind of buildings they made to survive severe winters or in flooded areas. If we don’t work together to save this heritage, we risk losing also our memory. And if you lose your memory, you cannot cope with your life anymore, you cannot be fit for the future. This is the big danger if we are losing heritage all over the world. How will we be able to manage our future?”