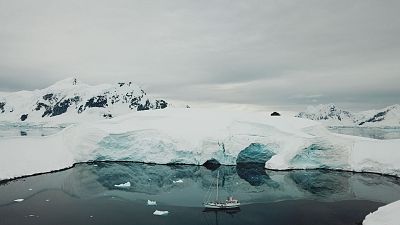 Antarctica, the white continent, is one of the most pristine places on Earth.

This huge region of the Southern Hemisphere and its surrounding waters are essential components of our climate system. They absorb nearly three-quarters of global excess heat and capture almost one-third of CO2.

However, this amazing region is at risk. Climate change is having a visible and potentially irreversible impact on marine life and biodiversity.

Scientists are now raising the alarm because, over the last 30 years, Antarctica has warmed by 1.8°C, that's three times the global average. As a consequence, sea ice is rapidly declining.

In 2019, the Belgica121 expedition explored the marine biodiversity of the West Antarctic Peninsula. The goal was to establish a detailed understanding of living species in that area, an area particularly exposed to global warming.

Bruno Danis, a marine biologist and professor at the Free University of Brussels, was the head of that mission, which collected more than 2000 organic and mineral samples. Scientists are currently analysing them in order to create a specific database. Danis tells us that changes in the Antarctic Peninsula are visible, "particularly in the land environment". He also says that it's even becoming visible in the marine environment because they have a system that is "bordered by glaciers with fiords, and the glaciers are melting, they are retreating in some respects from the system."

Studying the impact of climate change on biodiversity in this region will enable researchers to predict the evolution of ecosystems. As Danis says, "We have an ecosystem that is exposed to rapid changes for which we have a significant lack of knowledge." He believes that in order to reduce that lack of knowledge, they can use statistical models which would help create forecasts". In theory, those predictions or forecasts would help the international community take important decisions on how to preserve the biodiversity of the Southern Ocean.

As well as climate change, overfishing is another threat to this rich ecosystem. One of the most sought-after natural treasures is krill, a small crustacean, which is at the heart of the food chain in the Antarctic Ocean. Whales, penguins, seals, sea birds and fish all eat them.

To protect marine life and manage the region’s fisheries, a Commission for the Conservation of Antarctic Marine Living Resources, CCAMLR, was founded in 1982 under the Antarctic Treaty System. Part of its mission is to put in place Marine Protected Areas, MPAs. However, these MPAs can only be created if all the members agree by consensus.

To date, only two protected areas have been designated, one in the Ross Sea and another in the Southern Orkney Islands Southern Shelf. Two new MPAs have been proposed by the EU and they are supported by its member States. One of them is in the Eastern waters and another in the Weddell Sea. A third MPA proposal has also been presented by Argentina and Chile in the Western Antarctic Peninsula and in the South Scotia Arc. If these three new proposals are accepted, they would represent 1% of the world's oceans.

As part of the European Biodiversity Strategy 2030, protecting the Southern Ocean is a priority for the EU and its Member States. The MPA plan backed by Europe is also co-sponsored by the USA, Australia, New Zealand, Uruguay, Norway and the United Kingdom. China and Russia have opposed the proposals because of fishing in the region.

Unfortunately, the preservation of Antarctica is a bit like a global game of chess. The European Union is in favour of an ambitious plan to create the largest marine protected area in history, but to achieve this, the European Commissioner for the Environment and Oceans, Virginijus Sinkevičius needs strong allies.

He tells us that "protected areas will ensure that nature can basically rest and be untouched by people. Nature doesn't need additional activities, additional pressures." He feels that the EU needs "to convince Russia and also China and their colleagues that it is a matter of priority for them as well."

Genéviève Pons, the Director-General of the think-tank ‘Europe – Jacques Delors’ agrees with this. She believes that "China should seize the opportunity to play a leading role in the protection of climate and biodiversity in the Southern Ocean." According to her, doing anything else would be in exact contradiction to China's carbon neutral by 2060 goal that the Chinese president, Xi Jinping, committed to at the United Nations General Assembly in September 2020.

In regards to Russia, she says that they were among the first to sign the Antarctic treaty which dates back to December 1959. That was during the midst of the Cold War. To her and many more, this makes Antarctica "a continent that is dedicated to peace and science."

In the race to protect the Antarctic ecosystem, civil society can also play an important role. From Europe to America, several initiatives are underway to gain more support for the proposals on the agenda at the next CCAMLR meeting in October. Sea Legacy, an international organisation that promotes ocean protection, is backing a soft power approach.

Cristina Mittermeier, co-founder of SeaLegacy told us that "it’s up to the rest of us not to overly attack Russia and China, but instead to urge them to do the right thing." "What we need is public support. A massive group of individuals all around the planet are willing to take action", she added.

The organisation has a technology platform called OnlyOne where they have a petition asking CCAMLR "to expedite, to accelerate the decision on protecting Antarctica."

Marine protected areas are not a direct solution to climate change, but they could help create resilience to help the ecosystem adapt to global warming. Many scientists and policy-makers have called for at least 30% of the ocean to be protected by 2030, a target that could secure the long-term health of our planet.