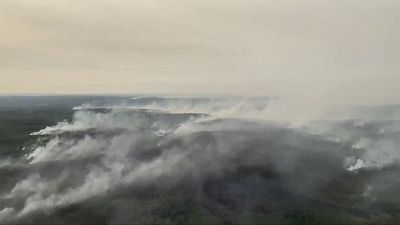 An air view of smoke from a forest fire in the republic of Sakha in eastern Russia.   -   Copyright  Russian Defense Ministry Press Service via AP
By Euronews  with AP  •  Updated: 19/07/2021

Russian emergency officials are continuing to battle a series of wildfires in the country's Far East region.

Heavy smoke from wildfires covered the city of Yakutsk and fifty other Siberian towns on Sunday, temporarily halting operations at the city’s airport.

Russia has been plagued by widespread forest fires, blamed on unusually high temperatures and the neglect of fire safety rules.

Local officials said 216 fires raged across the country on Monday, and the total area engulfed by blazes has grown to 1,500,000 hectares.

The Sakha-Yakutia region in northeastern Siberia is reported to be the worst affected, while more than 600 people have been evacuated in Karelia.

"We are experiencing the driest summer in the past 150 years in Yakutia, and the month of June was the hottest on record," Aysen Nikolayev, Yakutia’s governor, told reporters.

"This, together with the dry thunderstorms that occur nearly daily in our republic, brought about significant wildfires," he added.

More than 6,500 people are currently involved in the firefighting effort, the ministry said on Monday.

"We can’t see each other because of the smoke, our eyes are burning and overall the smoke is very dangerous for the health of us villagers," said Vasiliy Krivoshapkin, resident of Magaras.

"We see on television planes that are dropping water on the burning forest but they aren’t sending these planes to help us for some reason. Why is there no help?"

Last week, Russia engaged military planes to help tackle the blazes and drop 330 metric tons of water on the most active fires. Helicopters were also sent to the region to help transport firefighters and supplies, authorities said.