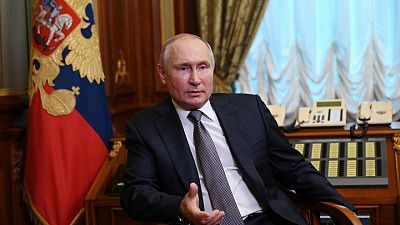 The Kremlin reported on Wednesday that Kerry, the first US Special Presidential Envoy for Climate who is currently in Russia on a work trip, had a positive dialogue about the topic. According to Russian officials, climate change is an area where Moscow and Washington had common interests.

In its readout of the call, it said Putin had told Kerry that dialogue on the climate should not be politicised.

"Obviously, we have some differences in the relationship between our countries but we were very pleased that President Putin took part in the summit," said Kerry to Russian Foreign Minister and climate envoy Sergei Lavrov earlier this week.

"We are pleased that Russia wants now to take steps, additional steps, because your country is impacted [by climate change], obviously. And we believe that there is space for us to cooperate on this," Kerry added.

What has been Russia's approach to climate change so far?

Russia is a cold country - the average annual temperature in Moscow is just 5.8 °C.

So climate change has serious effects on the country, including average temperatures rising, permafrost melting, more frequent wildfires, flooding and heatwaves. There is also now more risk of frequent coastal flooding and increased erosion of glaciers. This may ultimately lead to a loss of species and changes to the ecosystem.

Nevertheless, Russia is one of the major producers of oil and gas globally. The country produced around 12 per cent of the world’s oil supply in 2019 - that's around 11.5 million barrels per day.

In late March 2020, Russia presented a long-term strategy on how to reduce greenhouse gas emissions by 2050. It also agreed on the aims and goals of the Paris Agreement in 2016, meaning that the rise in global average temperature should be kept way below 2 °C.

Putin had told Kerry that dialogue on the climate should not be politicised.

But critics say the country is still not doing enough to tackle the crisis.

The Climate Action Tracker rates countries on a six-point scale - and Russia came last in 2020, ranked as 'critically insufficient' in its approach to climate change.

"Measures supporting the uptake of renewable energy continue to fall short and Russia is not on track to meet its modest near-term targets. There continues to be a general lack of action by Russia across the board on climate policy," says Climate Action Tracker's assessment.

In more hopeful news, it was reported that Putin called for Russian greenhouse gas emissions to be lower than EU’s, in April of this year.

"Over the next 30 years, accumulated net greenhouse gas emissions in Russia must be lower than in the European Union," the Russian president told top officials and lawmakers at his annual state-of-the-nation speech.

"This is a difficult task, given the size of our country, its geography, climate and economic structure. However, I am absolutely certain that this goal, given our scientific and technological potential, is achievable."