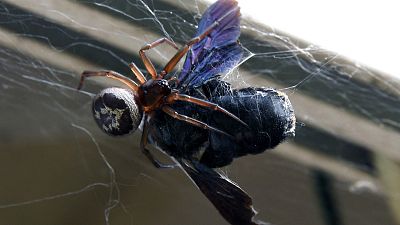 According to these researchers, spider silk could hold the secret to solving plastic pollution   -   Copyright  AFP
By Mishti Ali  •  Updated: 30/06/2021

A new plant-based material has been created - and it could put an end to single-use plastic.

A team at the University of Cambridge has created a polymer film by imitating the properties of spider silk, one of the strongest materials in nature. The product is as strong as many common plastics in use today and could replace the material completely in many common household products.

The ‘vegan spider silk’ was created using a method which assembles plant proteins into materials that mimic silk on a molecular level, resulting in a plastic-like free-standing film, which can be made at industrial scale.

From Alzheimer’s disease to dishwasher tablets

Professor Tuomas Knowles has spent years at Cambridge’s Yusuf Hamied Department of Chemistry, researching the behaviour of proteins. Much of this has been focused on what happens when proteins ‘misbehave’, primarily in relation to Alzheimer’s disease.

“We normally investigate how functional protein interactions allow us to stay healthy and how irregular interactions are implicated in Alzheimer’s,” says Knowles, who led the research. “It was a surprise to find our research could also address a big problem in sustainability: that of plastic pollution.”

While most other types of bioplastics require industrial composting facilities to degrade, this material can be composted at home. In addition, the Cambridge-developed material requires no chemical modifications to its natural building blocks, so that it can safely degrade in most natural environments.

It’s not the first of its kind, either. A team of researchers at Berkeley claimed to have created the world’s first biodegradable and compostable plastic earlier this year. The new plastic can degrade by up to 98 per cent in household compost in just a few days, simply by adding heat and water.

From lab to supermarket

The vegan silk will be commercialised by Xampla, a University of Cambridge company developing replacements for single-use plastic and microplastics.

They plan to introduce a range of single-use sachets and capsules later this year, which can replace the plastic used in everyday products such as dishwasher tablets and laundry detergent capsules.

The material has a performance equivalent to high-performance engineering plastics such as low-density polyethylene.

Its strength lies in the regular arrangement of its chains, meaning there is no need for chemical cross-linking, a technique frequently used to improve the performance and resistance of biopolymer films.

The most common cross-linking agents are non-sustainable and can even be toxic. In contrast, the new ‘vegan spider silk’ requires no toxic elements.

“The key breakthrough here is being able to control self-assembly, so we can now create high-performance materials,” said Rodriguez Garcia.

“It’s exciting to be part of this journey. There is a huge, huge issue of plastic pollution in the world, and we are in the fortunate position to be able to do something about it.”