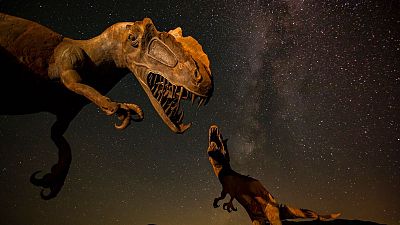 Paleoclimatologists have found that dinosaurs had to deal with greater variation in seasons than previously thought.

Using an innovative technique, new research carried out by a team at Vrije Universiteit Brussel provides a precise picture of the Earth’s climate 78 million years ago.

Previously, it was thought that when the climate warmed like it did in the Cretaceous period, the era of the dinosaurs, the difference between the seasons would decrease.

“However, our reconstructions now show that the average temperature did indeed rise, but that the temperature difference between summer and winter remained rather constant. This leads to hotter summers and warmer winters."

In order to study the climate during this period of high carbon dioxide concentration, the researchers used the well-preserved fossils of mollusks which lived in the south of Sweden during the Cretaceous period.

These shells grew in the warm, shallow seas which covered much of Europe 78 million years ago. The team recorded monthly variations in their environment and climate using a process comparable to examining the rings in a tree.

The research also has the potential to show what the future of climate change could be.

"Our results therefore suggest that in the mid latitudes, seasonal temperatures will likely rise along with climate warming, while seasonal difference is maintained,” he says.

“This results in very high summer temperatures. The results bring new insight into the dynamics of a warm climate on a very fine scale, which can be used to improve both climate reconstructions and climate predictions. Moreover, they show that a warmer climate can also have extreme seasons."

The development’s implications for the way in which climate reconstructions are made. The groundbreaking research has seen De Winter being nominated for both the annual EOS Pipette Prize and New Scientist Science Talent 2021.