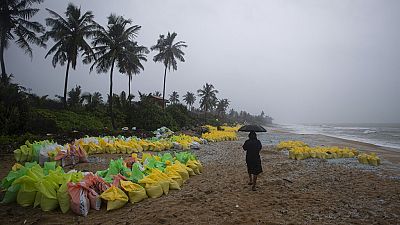 Sri Lankan authorities are bracing themselves for a new wave of pollution, following the sinking of the container ship X-Press Pearl off the coast of Colombo.

Up to three billion plastic pellets have already been released into the sea from the vessel.

The ship's cargo also included 25 tons of nitric acid and other chemicals, while its fuel tanks contained hundreds of tons of oil.

But its owners believe the fire which destroyed the ship will also have destroyed its charge.

"The experts who came are of the view that the oil would have burned but we are not confirming that,” said Nirmal Silva, Harbour Master at Sri Lanka Ports Authority.

"I mean, we are not saying 100% there is no oil... So far I would say that now it is nearly 36 hours since the vessel went down, the after part went down, we have not seen an oil spill so far. We can consider we are lucky."

The Centre for Environmental Justice NGO is suing the Sri Lankan government over what it is calling the island’s worst ever maritime disaster.

It claims there was a known fire risk before the vessel entered Sri Lankan waters.