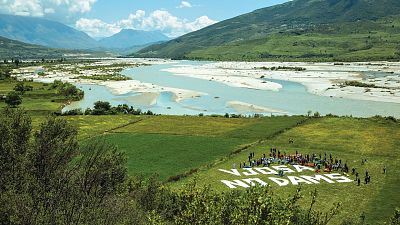 For the duration of Euronews' Green Week, our magazine and news teams are exploring stories and solutions for a better planet from across Europe.

The Vjosa is Europe's last wild river. That means it has been largely untouched by man and kept in its natural state.

The river is over 300 kilometres long and runs from Greece through Albania and into the Adriatic Sea. The parts of the river that run through Greece are called the Aoös and in Albania, it's called the Vjosa.

Some parts of the Vjosa are over 2 kilometres wide. Anyone lucky to visit this untamed river knows of its beautiful canyons, braided river sections, islands and oxbows.

Almost all its tributaries are free-flowing, creating the perfect living habitat for flora and fauna.

The Vjosa is one of Europe's lesser-explored rivers in regard to scientific studies. However, what is known is that it's home to over 1000 different species, many endangered and endemic to the region. According to Professor Aleko Miho from the University of Tirana, it is also a corridor for the migration of different species.

For people living along the river, it provides arable land and essential fishing for the local economy. Water sports like rafting, canoeing and kayaking have been increasing in recent years on the Vjosa and provide another source of income to the populations around it.

Only Albania’s part of the Vjosa is fully untouched and undammed, including all of its tributaries. That's the equivalent of 270 kilometres of free-flowing water.

However, a project to build 30 hydropower dams is expected to start in the coming years. Locals and NGOs argue that these dams will flood certain parts of the river and leave others completely dry, effectively killing off its biodiversity and changing the area irreversibly.

Save the Vjosa campaign

'Save the Blue Heart of Europe' is an international coalition of NGOs and locals to the Vjosa that have grouped together to raise awareness about the dam projects in the Balkan peninsula. Their main focuses are the Vjosa River, Macedonia’s Mavrovo National Park, the Sava river in Croatia, Slovenia, Bosnia and Herzegovina, and Serbia, and the rivers of Bosnia and Herzegovina. All these areas are also threatened by dam constructions.

The group is pushing for the Vjosa to be recognised as a National Park, thus giving it a protected status and stopping all dam constructions within its boundaries.

Kathy MacKinnon is Chair of the World Commission on Protected Areas, she believes that the campaign is "a rare opportunity to really protect one of the last wild big rivers". To her, it would be "an asset for Europe but also a contribution to global conservation efforts".

The future of the river

For now, the Vjosa has been given a low-level ‘nature park’ protection in Albania. Unlike National Park status, this will not protect it from dam construction.

However, the campaign is growing in popularity with conservationists, NGOs, political entities and environmental groups all recognising the need to protect this common natural heritage and the last river of its kind in Europe. Their fight continues.