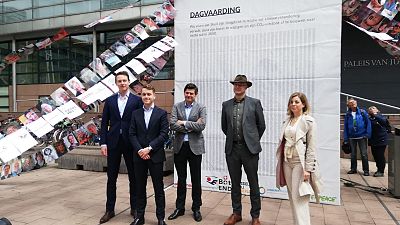 Multinational oil and gas company Royal Dutch Shell has been ordered to reduce its CO2 emissions by 45% in a landmark legal case.

Today, a panel of judges in a lower court in The Hague ruled that the company's policies on the matter were too vague.

It said the reduction must happen by 2030.

The lawsuit was filed by the environmental organisation Milieudefensie voor Veranderaars (Friends of the Earth Netherlands), alongside other major charities and thousands of co-plaintiffs.

The case is unique in that no compensation is being demanded from the company. Instead, for the first time in history, Shell is being asked to issue a policy change.

“This is great news for all of us, ourselves and our children,” a spokesperson for Milieudefensie told Euronews Green.

“Shell will adjust its policy so that it will also emit less CO2 in real-time. It is not up to the judge to say how Shell should do this, but the company will not be able to continue pumping as much oil and gas as they do now.

“Even if Shell decides to appeal, the ruling will lead to more cases worldwide and politicians and oil and gas companies will feel the pressure to change their course.”

There were tears of joy outside the court from the Milieudefensie team.

"This statement is going to change the world," said Roger Cox, Milieudefensie's lawyer.

"People around the world are ready to sue oil companies in their own country, following our example.

"And not only that. Oil companies will become much more reluctant to invest in fossil fuels, polluting fuels. The climate has won today. "

However, for the Dutch-British company, the ruling is only legally binding in the Netherlands.

Today’s verdict comes after Milieudefensie began putting the case together 2018 - together with six other organisations, including Greenpeace, and more than 17,000 co-plaintiffs. The first hearings started in The Hague in December 2020.

"Shell is the biggest polluter in the Netherlands. The company emits nine times as much CO2 as the entire Netherlands combined. Shell has known since the sixties that the use of oil and gas are harmful to the climate," reads a statement from the organisation.

According to Milieudefensie, only four per cent of all Shell's investments go to sustainable energy. According to the environmental organisation's experts, Shell has a responsibility not to harm both society and the climate.

Since Shell itself does not accept this responsibility, Milieudefensie, together with its co-plaintiffs, decided to go to court.

"We see that Shell is not changing on its own and continues to cause dangerous climate change,” Nine de Pater, Campaign Director for Climate Case Shell, tells Euronews Green.

“After trying many different ways to convince Shell to take a greener course, the only option left for us was to get them forced by a judge. Shell must now comply.

"The problem of the climate crisis is too big to wait for the big polluters to do something. Shell is responsible for causing dangerous climate change, and as long as Shell is doing that, we will continue our fight against it.

“The science is very clear on this: CO2 emissions must be reduced and there is no more room for new oil and gas projects,” de Pater adds.

Andy Palmen, interim director of Greenpeace Netherlands, described today's decision as "a historic victory," after the verdict was announced.

"Shell cannot continue to violate human rights and put profit over people and the planet," he said.

"This verdict is a clear signal to the fossil fuel industry. Coal, oil and gas need to stay in the ground. People around the world are demanding climate justice.

"Today the court confirmed that the fossil fuel industry cannot continue their climate pollution. We can hold multinational corporations worldwide accountable for the climate crisis.’"

Urgenda against the Dutch government

The Netherlands is lagging in climate protection, with the country's CO2 emissions surpassing the Paris Agreement targets.

Although the Dutch Prime Minister Mark Rutte has been in office since 2010, three Rutte cabinets have made little progress over environmental legislation. This lack of action led to a successful climate lawsuit against the government in 2013, from environmental organisation the Urgenda Foundation.

Back in 2015, Urgenda won the legal dispute with a ruling that is considered a historic milestone.

The Dutch government appealed several times until finally, at the end of 2019, the Supreme Court of the Netherlands also ruled in favour of Urgenda.

After seven years of litigation, these judges also ruled that climate change is a threat to the population and that the state must protect its citizens to reduce CO2 emissions as soon as possible.

"The Urgenda process is an inspiration for many climate processes around the world and us as well,” says de Pater.

“We are convinced that everyone must do their part. But especially the big polluters like Shell. The Urgenda process has shown that it is possible to force climate action through a judge."