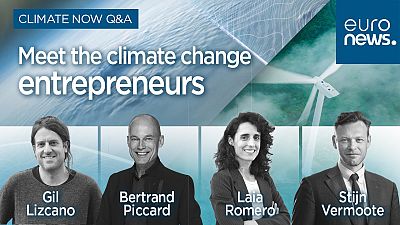 Sustainability has never been a higher priority for those that want to be successful in business.

In fact, 90 per cent of new startups consider it to be a high priority from the point of conception to operation.

Even companies without a strict climate focus are under escalating pressure to rethink their practices in the name of the future of our planet.

One thing is for certain - it is the actions and voices of climate entrepreneurs globally that have catalysed action by evidencing the benefits in their own work.

Euronews’ Science correspondent Jeremy Wilks sat down with four of Europe’s most essential voices in the field to discuss their work, with the help of your questions.

You can rewatch the full discussion in the video player above.

“Sustainable companies are the ones that are going to survive,” states Gil Lizcano, founder of Climate Scale and R&D Director at Vortex. His work is heavily centered around data, primarily producing detailed risk assessments related to climate change.

This rings true given that over 300 big businesses have pledged to go carbon neutral by 2050.

He believes that working under different scenarios is key to communicating what his clients ask of him. It is no longer useful to be “uncertain”.

One viewer asks about how our climate policies present potential detriments to developing nations. Is it possible that increased sustainable regulation could hamper their infrastructure?

This echoes concerns raised within an American context, where experts fear The Green New Deal could disempower impoverished communities by exploiting their resources.

Lizcano disagrees, but concedes that he doesn’t want to be “naive” about its complexities.

“The earth is interconnected. If Europe wants to change their regulations and make an important step forward we need to take into consideration all connections with all countries.”

Global explorer Betrand Piccard advocates for a “rational, logical” approach to our world’s problems. He famously circumnavigated the globe in 2016 using a solar-powered aircraft, and has since gone on to develop the Solar Impulse Foundation.

The foundation has sourced 1000 cleantech solutions since its creation.

Watch highlights from the panel in the video above

Many viewers are keen to know how budding climate entrepreneurs go about financing projects of this scale.

“If you have a good product that is profitable and protects the environment, I don’t think it’s a problem to find an investment.”

He took Bill Gates to task via Twitter earlier this week, to ask about corporate resistance to green solutions’ proven economic viability.

“From what I understand, a lot of companies hate change. They have a short-term view. Their CEO has stock options for next year, or the year after, so he wants to maximise the profit on a very short term. He wants to keep the old system running as long as possible.”

“We need people who understand that as soon as they change the system, the best it will be.”

In the midst of these complications, what startups are worth investing in? Europeans are not short of options.

The best startups to invest in are the ones “aiming for efficiency”, he said.

“Each time you see a company that can improve the efficiency of a sector using less resources, normally it pays for itself.”

Laia Romero has been explaining environmental concepts to business throughout her whole career.

As Managing Director and co-founder of Lobelia Earth, she compiles valuable data with organisations such as ESA, NASA and the Copernicus Climate Change Service to provide insights into the most pressing climate issues of our time.

She finds that companies need to have concepts appear “economically clear” before they are willing to take action. Change might be on the horizon - Romero that the European Commission’s Green Deal proposal is changing that in some ways.

First launched in 2019, The Green Deal pledges to turn Europe's "environmental challenges into opportunities" in an innovative action plan that spans decades.

“With the Green Deal, it’s clear that this is the way forward. There is a willingness to go into business with that.”

What should young climate entrepreneurs look out for?

Our final panelist Stijn Vermoote is tasked daily with engaging businesses with climate data in his role at the EU’s Earth Observation network, Copernicus.

When asked about his experiences with companies playing into "greenwashing", he argued that there is enough activist pressure on corporations to curb these practices.

Young people have played a large role and should not be “underestimated” when it comes to making companies keep their promises, he added.

Earlier this year one million young people urged their governments to prioritise the climate crisis. The rise of activists such as Greta Thunberg has made mobilisation more accessible to this generation than ever.

What would his advice be to those young people that are hoping to work as climate entrepreneurs?

Find important data and put it in the right context, just as every person on this panel has made a living from doing.

His work has taught him the value of “people who are able to convey a certain message, and explain in a simple way why it is important.”

“If I talk to young people I say it’s not just about IT specialists, or the engineer, or the one with an MBA. You also need somebody who is able to deal with graphics - there is a lot of disciplines who come into play if you want to make it a success.”