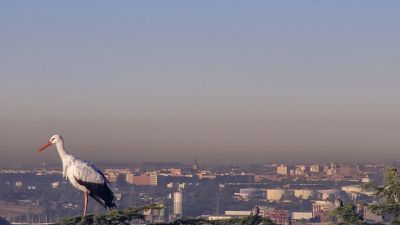 The quality of the air Europeans breathe has improved significantly over the last decade, the European Environment Agency (EEA) said in its latest report, resulting in fewer premature deaths.

The bloc's Commissioner for Environment, Oceans and Fisheries, Virginijus Sinkevicius, welcomed the latest figures as "good news" in a statement but stressed that the number of premature deaths linked to air pollution "is still far too high".

"If we are to succeed and fully protect people's health and the environment, we need to cut air pollution further and align our air quality standards more closely with the recommendations of the World Health Organisation," he added.

With the exception of ozone, all emissions and concentrations of pollutants have been decreasing over the past ten years.

In particular nitrogen oxides from transport have declined significantly, "despite growing mobility demand an associated increase in the sector's greenhouse gas emissions".

Pollutants emitted by the energy sector have also massively decreased. The downward trend is, however, less visible for sectors such as agriculture or residential heating. — key sectors with buildings accounting for about 40 per cent if the energy consumed in the EU.

Across the 41 countries, Bulgaria, Croatia, Czechia, Italy, Poland, and Romania were flagged as exceeding the EU's limit for fine particulate matter while Estonia, Finland, Iceland and Ireland were singled out for being the only four counties to have fine particulate matter concentrations that were below the WHO's stricter guidelines values.

Brussels has been taking member states to court over air pollution. Earlier this month, the European Court of Justice ruled that Italy has "systematically and persistently" breached an EU directive setting daily and annual limits on the amount of harmful small of fine particles.

The Commission has also referred Poland and France to the ECJ.

The EEA's latest study is based on data collected in 2018. It is therefore too early to assess the full impact of the first COVID-19 lockdown on air quality. However, the agency collected the first data in April.

"This year the decrease for fine particles in general for all Europe is 22%," Alberto González Ortiz, an EEA air quality expert, explained.

"We have also a decrease in nitrogen dioxide, which is a pollutant that comes mainly from road traffic. We see a decrease in this traffic of around 24%."

"We see a reduction of up to 70% in the nitrogen dioxide concentration at traffic stations in Spain and Italy, which were the countries where lockdown measures were the strictest," he also said.