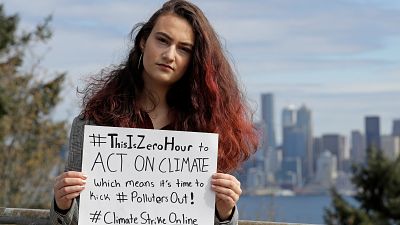 In some ways, Jamie Margolin is just like any other first year university student. She speaks to me from her campus at NYU in New York city, where she’s studying to be a director for film and television.

"I’m here to learn how to make amazing art and work in the entertainment industry. I have dreams, I have creative aspirations," she tells me. "Because no little girl grows up thinking, ‘I hope to fight a horrible crisis for the rest of life.’"

"I'm studying to learn how to make things that bring me joy," she says.

There are likely countless young people with similar career ambitions to Jamie, but the difference is, this young activist spends the majority of her time actively fighting to save the planet. Hope is not something she seems comfortable with, responding “I’m not an optimist, I’m a realist,” when I ask her if she feels positive about the future.

As a young person, it’s a difficult time to plan ahead, smack bang in the middle of a climate crisis - let alone a global pandemic.

Jamie got involved in climate activism during the last US general election when she was just 14. She campaigned vigorously against Donald Trump and helped mobilise support for the Democratic party. When Trump won, she felt defeated knowing that the new leader would not be supporting environmental reform and that climate change would only continue to get worse.

“I fell into a depression for a long time,” she admits. “After a while I thought, I need to take some action - so I started to organise in my local community. I started fighting and pushing for climate action.”

An education on climate change

Even before high school, Jamie says she knew about the gravity of the climate emergency. She says she has always cared, ever since she was really small, adding “it’s just something that's always been there looming over me for as long as I can remember.”

She feels lucky to have received an education on climate change though, having attended a particularly progressive school in Seattle. We reflect on how much has changed in as little as 10 years. As I, roughly 10 years her senior, don’t feel that I was taught enough about environmental issues or sustainability at school.

There’s that word, sustainability - it’s become a divisive term. I ask Jamie what it means to her?

Just understand that you, the individual, are not responsible for the climate crisis.

“There is a myth that has really stuck around and been perpetuated. You know the term ‘carbon footprint’? That was come up with by the fossil fuel industry to try and get individuals to blame themselves, rather than blaming them. It's been a huge propaganda campaign to get individuals to be eco-friendly and recycle, when in fact they’re the ones who need to be held accountable.”

Sustainability can be valid, we agree, and living a greener lifestyle is certainly a good idea. But the problems are bigger than that, we need action from governments and corporations, in a top-down way, if we’re going to achieve systemic change.

“These corporations have got us pointing fingers at each other, shaming each other, while they happily torch the whole world.

“Just understand that you, the individual, are not responsible for the climate crisis. Over 70% of emissions are caused by just 100 corporations.”

"I can't see one year ahead of time." We spoke to 18-year-old climate activist @jamie_s_margolin about planning for the future in the midst of a climate crisis. . #eugreenweek #livinggreenweek #greenactivism

Jamie touches on an issue that’s incredibly close to her heart. The California wildfires have been raging all summer and are still going on today. Not only do they pose dangerous health risks as a result of the smoke pollution, whole landscapes have been decimated, businesses destroyed and lives lost. So far, the deadliest fire was the Bear Fire in the North Complex of California, which killed 15 people in the communities of Berry Creek and Feather Falls.

“The West Coast is on fire right now because of the fossil fuel and animal agriculture industries,” says Jamie, “not because a kid used a straw once.

“‘Reduce, re-use, recycle’ has been going on for years, and it would have worked by now if that was the solution. But it hasn’t.”

That’s why greenwashing is such a toxic form of advertising, we agree. When companies use eco-friendly language and imagery to sell products, but in fact they’re doing nothing to help the environment - “often they are actively harming it instead,” says Jamie.

“We’re trying to dismantle systems here but the corporations are just pretending to be our friends. I would literally rather the commercials say, ‘yay we’re drilling oil’, because at least that’s honest.”

Hope is a dangerous thing for a woman like me to have, but I have it...

Being a climate activist is hard work at the best of times. It’s exhausting to spend your time convincing others to listen to the science - and to rally against systems that are simply not listening. I’m interested to know what it is that inspires Jamie?

“To feel hopeful or inspired, I would have to see real action from leaders. Real, tangible, sweeping change, legislations, a green new deal. Not band-aid fake solutions.”

She might not be an optimist, but she’s not a defeatist either. “I think there has to be a realistic balance.”

“I am just taking it one class, one meal, one step at a time, trying to envision the future, hoping for the best but preparing for the worst.”

Jamie’s first book, Youth to Power is out now.