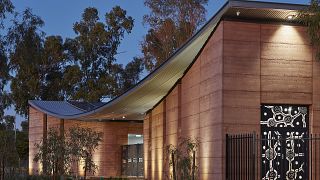 When you think of buildings made of rammed earth, you may conjure images of ancient dwellings in remote parts of the world, or major architectural wonders like the Great Wall of China.

As one of the most traditional forms of construction, there are examples of rammed earth buildings dating back as far as Neolithic China, with remnants of structures from the 9th-7th millennium BC.

Rammed earth involves packing natural materials, like chalk, gravel, lime and earth, along with a mixture of clay or other damp substances, into a mould. This result is an impressively strong structure, with very little environmental impact. In fact, it’s one of the most sustainable architectural methods in existence.

Unsurprisingly, it takes a sophisticated understanding of the materials and process to succeed in the construction - meaning there are few with the expertise to use this method in modern times.

“Although rammed earth itself is old, our research is quite a new field compared with other more traditional construction materials like concrete, steel, masonry and timber,” explains Daniela Ciancio, senior lecturer in environmental and mining engineering at the University of Western Australia.

“Unfortunately, a lack of research means a lack of understanding of the material and its structural properties.”

But the tradition is undergoing a resurgence.

Rammed earth buildings for Indigenous use

In Western Australia, Ciancio and her colleagues considered the use of sustainable rammed earth within remote Indigenous communities.

“There are currently several projects around the world that aim to promote rammed earth as a sustainable and cost-effective construction technique,” she says. Although at the moment, these projects are usually highly-specialised, Ciancio feels that sustainable architecture is inviting more and more interest on a global scale. As such, techniques like rammed earth may grow in popularity.

“While it might not be as grand as the Alhambra, the chances of finding yourself inside a rammed earth building in the years to come are growing,” she adds.

In Western Australia, a Sydney-based firm has developed the first ever primary healthcare facility in the small town of Newman. The architects used rammed earth techniques in order to make the construction project as sustainable as possible.

Swipe below to see the project:

The clinic cost just under €5 million to construct, with the aim of providing remote communities with better healthcare access. Usually, people living nearby have to commute up to 1,400kms south to the city of Perth for medical treatment, meaning healthcare becomes a privilege afforded only to those with the means and finances to travel.

“This project shows what is possible from true collaboration with Aboriginal people.”

The architects, from Kaunitz Yeung Architecture, have spent over a decade embedding themselves in remote Aboriginal communities in order to best understand their practical and cultural needs.

The building has been made exclusively using earth from the site, in order to avoid transporting materials from Perth or other distant cities. The technique was also used to create “a human and intuitive connection to its place”, according to a spokesperson for the firm.

A respectful and collaborative approach

The landscaping involved with the clinic’s construction also helps to ecologically repair the site, built on degraded land, with 2000 endemic species of plants planted to help provide the building with shade.

“This project is the culmination of all we have learnt from working with Martu communities for the last four years and the communities of the Western Australian Desert for the last decade,” explains lead architect David Kaunitz.

“This project shows what is possible from true collaboration with Aboriginal people. Their generosity and wisdom have taught us so much.

“By making a genuine effort to incorporate all perspectives, unique architecture is formed, architecture that is contextualised to people, place and culture, architecture with an inherent relevance,” Kaunitz adds.

The building process has also been praised by members of the Aboriginal community. Robby Chibawe, CEO of the Puntukurnu Aboriginal Medical Services says, “the respectful and collaborative approach by Kaunitz Yeung Architecture with the Martu Elders and communities has created a deep sense of ownership and pride in this health centre amongst the local community.”

With the success of this project, rammed earth techniques could be the best way to incorporate sustainability into construction. As shown through the Newman healthcare clinic, this method has the potential to be successful with Indigenous groups, where a respect for and connection with nature is central to people’s ethos and identities.

But as other societies and communities increasingly prioritise green values, could we be seeing more rammed earth buildings elsewhere?