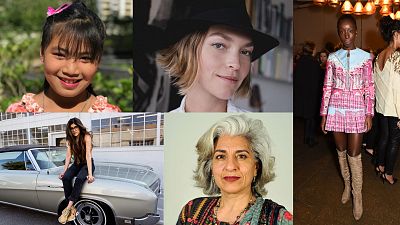 A campaign launched by the United Nations Development Programme (UNDP) has brought together climate conscious influencers this World Environment Day to tell us why nature is so important to them.

The Mission 1.5 campaign is built around an online and mobile game which allows users to take on the role of government leaders to make decisions about climate action. The goal is to try to keep global warming below 1.5 degrees Celsius, the level scientists at the IPCC say is safe. After the game finishes, players get the opportunity to vote on key environmental decisions they want to see adopted.

The campaign aims to give millions of people around the world the opportunity to have their opinions heard. It's about addressing the disconnect between citizens and government which has, as of late, led to school strikes and mass protests for the climate. If successful, this could end up being the biggest international survey of public opinion on climate change ever conducted.

Once the votes are in, experts from the University of Oxford will process the results to deliver reliable information on public opinion to governments.

Already, the game has been played 1.2 million times.

In the spirit of having our voices heard, Mission 1.5 has brought together green influencers from different countries and industries for World Environment Day to share why they believe nature is important and why we should all make an effort to protect it.

"Nature is the reason that we are alive and it’s time it was prioritised. We need to listen to the indigenous people who live in harmony with it and change the system that is causing the climate crisis,” says Venetia.

"Previous generations fought for their freedoms and their democratic rights. The fight of future generations will be for the planet. We must fight for it as our grandparents and parents fought for civil rights and freedom of expression. Without nature we have nothing."

"Nature is home for us. I am nature, you are nature and everything we experience is nature. We can longer go on mistreating our only home. When we protect nature, nature protects us."

"Love is the opposite of weakness. And justice is what loving out loud and in public looks like. Loving our planet means we fight for her and for the future generations who will love her too," she says.

"Loving our planet means centring and uplifting Black and Brown and Indigenous peoples who have suffered the most at the hands of manmade environmental injustice yet know how to love this planet best."

Emily Sheffield, Founder, This Much I Know News

“While our lives have been on pause, nature has thrived. If there’s any lesson we should take out of this period, it’s to nurture the natural world. We can’t go back to how things were.”

"Nature is incredible. From the tallest mountain to a buzzing bee, from tropical rainforests to breath-taking coral reefs in the ocean, every part is important and needs protecting. The natural world is under critical threat and now is our last chance to put it right," says Ella.

"We need drastic and collective action to be taken by governments, manufacturers, and individuals to create real change and make a better future happen.”

“For so long I had understood climate change as a purely “environmental” problem, as if somehow ‘nature’ and 'the environment’ was distinct from our experience as humans. I couldn’t have been more wrong: We are nothing without nature, our very survival depends on it thriving. Climate change is ultimately a human problem and a human rights issue. It isn’t just about numbers, graphs, melting ice caps, or starving polar bears. Nor is it something to be expected in the future. It is about our survival as humanity, about the people for whom climate change is already an everyday reality - already an issue of life and death," Alice says.

"This is a story we have failed to tell properly."