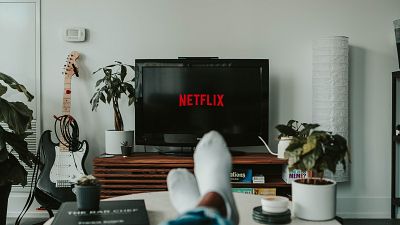 You can now offset your Netflix binges thanks to a new subscription service. Plantyflix, a start-up based in Berlin, Germany, allows users to balance out the carbon emissions from their streaming habits.

From just €1-6 a month, subscribers can choose to plant either 2, 10, or 30 trees to offset their use of streaming platforms like Netflix or Amazon Prime. Recent research found that Netflix’s most popular films and series produced a combined total of almost 1.5 billion kg of CO₂, which is the equivalent of travelling 4.6 billion km by car.

From the giant data centres using billions of litres of water a year, to the CO₂ emitted by our emails, the impact our online activity has on our real-world carbon footprint is often surprising. Streaming alone accounts for 60 per cent of the internet’s carbon emissions.

With COVID-19 lockdowns around the world increasing our collective use of streaming services, Plantyflix’s founders Fabrice Diedrich and Liam Hänel were inspired to consider the damage this could be doing to the environment.

“There is obviously a huge increase globally for streaming services during lockdown,” explains Diedrich, “this made us think about an article we’d seen about the unknown impacts of streaming videos online through platforms such as Netflix. We thought there needed to be a way for people to take action while they sit at home watching Tiger King.”

From this idea, Plantyflix was born. The pair designed and built the site in two weeks, before partnering with Eden Reforestation Projects, an international charity which works with other major offsetting services like Offset.earth and Ecosia. So far Eden has planted 313,834,600 trees across six countries thanks to its international partners, and Diedrich hopes Plantyflix's subscribers will have contributed another million trees by the end of 2020.

What is carbon offsetting and does it work?

Carbon offsetting is a concept with which many of us are now familiar, as airlines and travel companies often include an ‘offset’ add-on when you book a holiday. Companies work with partners like Eden to plant enough trees to absorb the carbon dioxide emitted from your travel, supposedly cancelling out the environmental impact of the trip.

But there are critics of carbon offsetting, who argue that the term is misleading, saying it implies individuals can lead environmentally irresponsible lives, and then simply plant trees to rectify their behaviour.

“Offsetting projects simply don’t deliver what we need – a reduction in the carbon emissions entering the atmosphere,” writes Greenpeace digital campaigner Alia Al Ghussain, “instead they’re a real distraction from the real solutions to climate change.”

“The big problem with offsets isn’t that what they offer is bad, but rather that they don’t [...] actually cancel out the emissions to which they are linked.”

So in order to properly eliminate the carbon emissions from our Netflix habits, we would need to not watch anything in the first place. But this isn’t a practical solution, particularly not in the current context of coronavirus, explains Diedrich.

“We definitely share parts of these views,” he says, “just relying on offsetting and continuing to pollute is not the way to go. But people are also not going to stop watching Netflix either, so why not just plant trees while you do it?”

We reached out to Netflix for comment, who have not responded. The platform has made efforts to address its commitment to sustainability, but at present there are no public plans to follow in Plantyflix’s footsteps.

Should they change their mind, Diedrich would consider this a victory. “In general we think the more trees we plant on our earth, the better,” he says. “If Netflix started planting trees, it’s a win. Plus there’s always other streaming platforms and their users will need trees planted by Plantyflix as well!”