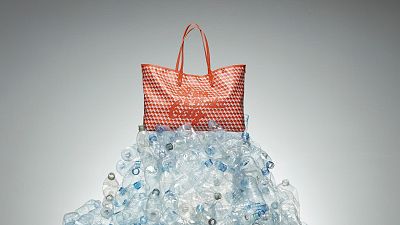 Back in 2007, the UK alone was using 10.6 billion plastic bags a year and the world was on the brink of an anti-plastic revolution.

At the vanguard of the movement, designer Anya Hindmarch launched her “I’m NOT a plastic bag”, a €6 canvas tote created for charity and seen on celebrities from Keira Knightley to Reese Witherspoon. It marked the beginning of the now ubiquitous canvas tote with tens of thousands of people queuing outside the UK supermarket where it was first available vying to get their hands on this piece of eco-chic.

Since then, our understanding of waste has transformed and simply finding ways to avoid excessive plastic use isn’t enough anymore. “Someone said to me during the I’m Not A Plastic Bag project, how when you throw something away, there is no away,” Hindmarch says, “I have not been able to get these words out of my head.”

And Hindmarch is right, there is no away. We are not always very well informed about where our waste goes and not all of it can be recycled. “I think unless you connect people and for them to see how horrible it is,” she explains, “you often don’t affect change.”

The fabric on the brand’s new bag may feel like cotton but the clue is in the name. Instead of using virgin plastic fibres, the "I Am A Plastic Bag" is made using yarn from recycled plastic bottles. So that your belongings don’t get wet when it rains, the bag has a waterproof coating that comes from an equally unusual source. The PVB weatherproofing is harvested from old car windscreens, something that the brand believes is a first.

The first to be released will be the charcoal, a bag in two shades of grey with a geometric print which will cost around €830. It has taken two years of research and development to create the material for the new bag which uses 32 half-litre bottles worth of plastic for each large tote and Anya Hindmarch says it won’t be making any money from the sales.

This coated fabric is currently made in Taiwan, a country with some of the most efficient recycling systems in the world. At the moment, there aren’t any options to make materials like this from waste in the same way in Europe but the brand hopes to change that by finding a partner factory in Italy to aid production in the future.

Instead of launching “ I AM a plastic bag” with a flashy event at London Fashion Week, Hindmarch wanted to introduce the world to the collection’s message in a more fitting way. Using her association with fashion and the attention that receives during the industry’s biggest showcase, she turned her stores into a visual representation of the problem.

“We closed our stores for three days for London fashion Week, and filled them with 90,000 used plastic water bottles, which is quite horrible when you see it, quite shocking, and that is six seconds world consumption.” The Anya Hindmarch team created the display by collecting bottles from their local communities and hope that both it and the bag itself will send a message to their customers.

“Let’s just not make new stuff, let’s reuse what we have, recycle and be responsible. And that it is something I hope our customers will love and want to keep.”