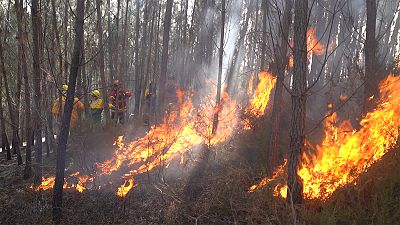 Controlled fires and herds of goats are two of the key weapons being deployed in Portugal to adapt to the enhanced risk of forest fires in the country in light of climate change. We report from the front line to see how the challenge is being met. But first, the latest data from the Copernicus Climate Change Service.

Warmest January on record in Europe

It has been very warm for the time of year. We've just had the hottest January on record in Europe, with temperatures 3.1 degrees Celsius above the 1981 to 2010 reference period.

The figure for Europe should also be looked at in a wider context. Looking at the map of Surface Air Temperature Anomaly for January across Europe, Russia and east to Japan, we can see that Europe is visibly warmer, but other areas in the centre of the Eurasian continent are much warmer still.

It is worth bearing in mind that there is significant seasonal variability in the wintertime in Europe, and some areas of the northern hemisphere, for example Alaska, have seen temperatures 4.7 degrees lower than average in January, according to NOAA.

January was marked by ferocious forest fires in south eastern Australia, exacerbated by an unusually long heatwave and drought.

Images from Europe's Sentinel-2 satellite illustrate the scale of the damage, with a 100km swath of the country north of Sydney imaged before and after the fire. The areas in brown on the image taken after the fires were burned by the flames.

Portugal prepares to face the flames

Climate change is projected to increase the risk of forest fires, even though the link between the two is complex. Portugal is one of the countries in Europe most threatened by wildfires, and as the climate changes, the government has decided that it wants to be prepared. Part of that motivation comes in the wake of the summer of 2017, one of the worst fire seasons in the country's living memory.

A record area of over 500 thousand hectares burned; hundreds of homes were lost; and over a hundred people died.

The area around the municipality of Pedrógão Grande still bears the scars of the fires that ripped through the area. Stands of burned trees appear randomly as you drive the rural roads, and stretch from the asphalt to the horizon. Thirty of those who died were killed in their cars along one stretch of road as they attempted to flee.

It's not something that people here have forgotten, two years later.

In the nearby village of Ferraria de São João, community organiser Pedro Pedrosa gave a sad smile when asked what he remembers.

"It burned," he said simply, shrugging his shoulders. “We were surrounded by the fire for five hours, defending our houses and our village."

At least one person in Ferraria de São João died that day, the mother of local shepherd who was found in the field where her goats are usually penned.

Pedrosa said that 2017 changed the way he saw his home.

"I was thinking at the time, after the big fire, [either] we will do something, or I will choose another place. There’s so many places in the world to live, why stay in a place where my kids will be threatened to death?"

How Portugal is managing the risk

Pedrosa did do something, starting with gathering the community and talking about climate change, and how they would need to be ready for the potential of more fires, faster moving fires, and hotter fires.

“We think that’s everything to do with climate change because these events are happening more and more, and will happen in the future for sure," he said. "That’s one of the main reasons we decided to do something, because if we want to keep living in a place like this, we need to be prepared.”

Being prepared is a big job. After 2017, the Portuguese government legislated that trees and brush must be cleared from roads, to create a "buffer zone" of 10 metres on either side, using the tarmac to slow the progress of the blaze — and to create a safer road if people need to escape, something that was desperately needed three years ago.

But Portugal has the highest percentage of privately owned land in the European Union at 97 per cent, and land is often left to grow wild. It can be difficult to even identify the owners, and even moreso to enforce fines for overgrowth. Clearing the fuel makes for slower-moving fires, which are more easily controlled.

So when the owners or community organisers like Pedrosa don’t manage the land, the newly-created rural fire service, AGIF, is stepping in. They deploy chainsaw-wielding teams to chop down the excess growth, in particular the flourishing eucalyptus which burns so well.

The government is also investing in even lower-tech solutions. A pilot programme was launched to pay for people to work as shepherds in vulnerable areas, with a specific goal in mind; get the goats to clear low-lying shrubs and plants.

“Fire is a good employee, and for sure during the summer a bad boss. So we need to use it wisely during the winter time,” says Tiago Oliveira, a scientific expert in wildfires and now the chief of the Portuguese Rural Fire Service.

His teams light up areas of the countryside in what is known as a prescribed burn, turning tinderbox zones into cinders, creating fire breaks which will halt the flames in fire season. But they can only burn when the landowners agree to it, meaning his job is half fire chief, half public relations guru. Explaining how fire can be a good thing can be a challenge.

But Oliveira says that firefighting is no longer a summertime job — more work needs to happen in the off season to prepare.

“It’s expected that the frequency of the fires will become higher in the future, and [there will be] an  extended fire season. So we need to take all opportunities during the winter time, spring and autumn, in order to have the job done on the prevention side," he said.

"Treat the land with sheep, mechanical [clearing], prescribed burning and so forth. So if you can do it, not just walking but running ahead of the fire, we will be on the safe side.”

Oliveira says it’s a matter of when, not if Portugal will burn again. But if the country can adapt and be prepared for the new conditions it faces, it stands a better chance of saving both homes and lives.

Wildfire rages in southern Spain forcing over 3,000 to evacuate