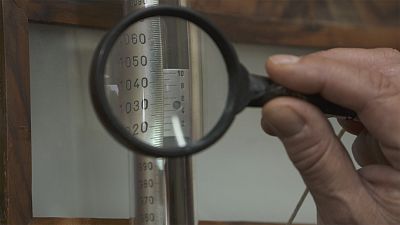 We all lived through it, and we all know how often it was unusually warm at certain periods throughout 2019. Now the data is out and scientists can say that 2019 was the warmest year on record in Europe.

The latest information from the Copernicus Climate Change Service shows temperatures were over 1.2 degrees Centigrade above the 1981-2010 average in 2019.

Only in parts of Canada was it was cooler than average.

What does that mean for the future?

"There are interesting pieces of research, for example, showing that what was maybe typical in the early 2000s will be considered cold in the 2030s and 2050s, and what was considered abnormally warm will be considered normal on that kind of timescale. So everything is creeping slowly but surely upwards."

The value of historical records to identify climate trends

We have excellent climate data for our planet for the past 30 to 50 years, but there is also a great deal to be learned from probing much older historical weather records, as they can offer a treasure trove of data allowing fresh new insights into how our planet is changing.

To find out more, we went to the Observatori de l'Ebre in Catalonia, Spain, an observatory founded by the Jesuits in 1904. It holds a highly valuable archive of weather data, even for the period from 1937 to 1938, when the hilltop area was on the frontline of the Spanish Civil War.

Hydroclimatologist, Pere Quintana Segui has analysed the archive data to look for climate trends. He has found some clear signals, despite the great variability of the Mediterranean climate. For example, the amount of rain falls per year now as it did at the start of the last century, although it falls in more intense periods, with dry spells now being much longer.

"What we see is that the number of consecutive dry days in Summer is lengthening," he tells Euronews. "Therefore the dry spells are getting longer and longer. It is as if Summer is pushing out Spring and Autumn, and getting longer."

The records also reveal that extreme events like heat waves are now more frequent than a century ago.

"Before you could have moments of extremes, but that doesn't mean that the climate then was the same as now. That's the kind of thing you hear from people like my father," says Pere.

"'Yes, you see, this kind of thing happened before,' he would say. Yes, beforehand it happened every 25 years, and now it happens every 5 years!"

The Observatori de l'Ebre is part of the World Meteorological Organisation's Centennial Observing Station network, a grouping of institutions with over 100 years of excellent quality data on key parameters such as temperature, barometric pressure and rainfall.

The information they can offer is very useful for climate science, as it allows the experts to have a much longer-term view, and to be able, for example, to say if a given event ever happened in the past 150 years.

Climatologist Manola Brunet, who leads a series of efforts to recover historic weather data around the world, something she says is a considerable challenge.

"Having long time series allow you to establish the ranking in which the different years are positioned," she says. "For example, if you don't have a long series, you can't establish if it's hotter now than it was in the past, in the 19th century, for example. Thanks to the fact that you have long series that come from the many centenary observatories like the one we are in you can say that this year has had an unprecedented heat record."

However, Brunet laments the availability of excellent data coverage for the entire planet. "In African countries, South America, Southeast Asia or the Pacific, just to name a few, even current (weather) information is not transmitted in real-time," she says.

"So that means that for a good portion of the planet we lack information that allows us to establish adaptation strategies to the impacts of the climate change that we are already facing."