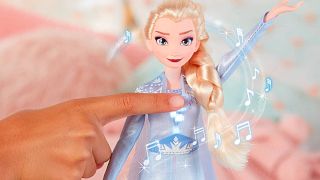 The new Disney film has been called out by green charity Friends of the Earth for selling plastic merchandise.

Frozen 2 was released on 22nd November this year. It is the sequel to the original Frozen which became the top-grossing animation in box office history in 2013.

Since its release, the film has been interpreted as having an environmental message that children can relate to. In the plot, protagonists Elsa and sister Anna set off to save the kingdom of Arendelle, after discovering earlier generations were neglecting nature and bringing a curse to the kingdom. Frozen 2’s autumnal theme stands in stark contrast to the original film’s perpetual winter, perhaps to represent the changing seasons and worries over climate change.

The movie revolves around the idea of inspiring change, which can been seen in the new hit song, ‘The Next Right Thing’. In the lyrics, main character Bell sings symbolically about the current state of the planet “I've seen dark before, but not like this, this is cold, this is empty, this is numb.”

She finishes with the inspiring message,

“When it's clear that everything will never be the same again, then I'll make the choice, to hear that voice, and do the next right thing.”

However, despite the environmental undertones, millions of pounds worth of plastic toys are on sale following the release of film. Merchandise is a lucrative business for Disney, with the licensing segment of entertainment and characters having accumulated $107.2 billion in sales after the first movie. This has since been called “the Frozen effect”.

Since the movie hit the screens, toys on offer include a £32 Elsa singing doll and a Queen Elsa Adventure Doll for £22.49. Sold on major platforms from Amazon to Argos, the dolls are clearly marked as made of plastic. The £39.99 ‘Into the Unknown’ Elsa Doll from Frozen 2 has already sold out in John Lewis stores in the UK.

"If the franchise wants to keep inspiring young audiences, it should recognise that anti-pollution messages will chime with them far more than pumping out another predictable range of plastic destined for landfill,” a spokesperson from Friends of the Earth told the Telegraph.

The charity spokesperson called the film “strongly progressive” with appeal to children, but said “cutting out frivolous plastic” would be a positive step on the way to sustainability.

Plastic toys are a problem

The BBC reported that last year, consumers spent £370 million on toys. What’s more, according to the British Heart Foundation, over a quarter of UK parents admit to discarding toys that are in perfect working order. Green charities now warn the plastic toy industry is contributing to vast amounts of plastic ending up in landfill and oceans.

To keep your children happy, tips include making your own toys, buying second-hand and considering other materials such as wooden figurines and textile puppets.

Zero waste shops like Plastic Freedom encourage consumers to change their habits, offering plastic-free alternatives in time for Christmas. Founder Beth Noy says, “I really believe that one person can make a difference and cutting out plastic from your life will make you happier, healthier and motivated to make a change.”