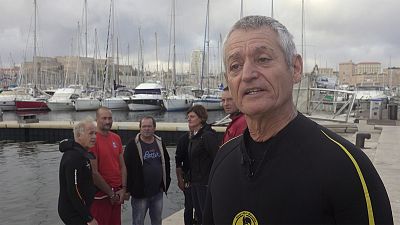 Images of rubbish piling up in the ocean can be a depressing sight. But the good news is that there are signs that cleanup campaigns are having an impact.

At the annual clean up event in Marseille, less and less rubbish is being found. Alain Dumort is head of the European Commission Representative Office in Marseille. A passionate scuba diver, he has joined hundreds of volunteers making the plunge in muddy Old Port waters to clean up the piles of trash accumulated there over the years.

Unlikely as it seems, the situation here in Marseille is improving.

“Unlikely as it seems, the situation here in Marseille is improving,” he says. “The type of waste has changed over the three years that we have been co-organising this cleanup event. Why? Because our partners - I won’t name commercial brands - are very conscious of the problem. They’ve cut down on litter, especially single-use plastic, and installed more waste bins, so there's less and less rubbish of this type.

“We see other waste such as building-site barriers, bicycles and of course electric scooters, but less and less of those too. And that's a pretty good sign. Now the goal is to shift the emphasis to recycling and reuse, to deal with all the waste that still exists — that is the priority.”

Cleanup operation is a global movement

The Vieux-Port Propre operation is one of over 70 similar events receiving financial and organisational support of the #EUBeachCleanup campaign around the globe.

“This operation is part of a much broader campaign, as we, the European Commission, work at the European level, but we also have a global calling," says Dumort. "That's why this EU Beach Cleanup campaign is carried out together with the United Nations."

“Similar operations are taking place in many countries around the world, and in particular throughout the Mediterranean region - in Italy, Spain, Algeria, in Morocco, Jordan and so on. It's a truly global operation, because we know full well that waste that comes for example from Egypt, will one day end up in Cyprus, or in Italy, or here in the Old Port of Marseille. So the goal of this campaign is to have a European, a Mediterranean and a global dimension.”