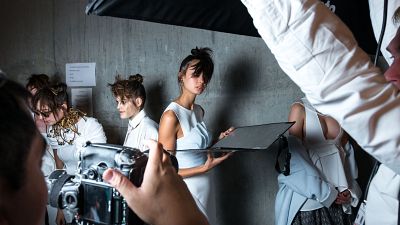 Heading down to London’s trendiest area in Shoreditch, the setting felt apt for a debate around fashion and its relevance today. It’s a Thursday evening in November, and as I set foot in East London’s hipster advertising agency, Mother, I am prepared for a healthy dose of debate on the most exclusive week in the fashion calendar.

I am attending the launch of ‘The Debate’, a series by up-and-coming magazine Screen Shot, a new current affairs platform for millennials. The idea behind the series is to highlight that there are always two sides to every story. It’s about “breaking our information cycle and encouraging ourselves to know more,” Shira Jeczmien, Screen Shot’s founder and commissioning editor, tells Euronews Living.

The question of the evening was: “Should fashion weeks be cancelled?” The host for the discussion was comedian Grace Campbell, who provided welcome relief as the conversations grew heated. The tension was hardly surprising when the central theme to both arguments was what we can do about the climate crisis.

The debate featured two experts from the field, who debated for 45 minutes, followed by a Q&A session that allowed the audience to get involved.

On the side calling for fashion weeks to be cancelled was Clare Farrell. Clare is one of the co-founders of Extinction Rebellion (XR), although as she pointed out, “there are a lot of founders, not just one or two of us.” XR is the global climate movement that has grown exponentially since its founding in the UK in 2018, now in over 50 countries.

The group’s second International Rebellion that took place from 14-21 October this year saw more than 1,600 people arrested in the UK.

Clare talked of XR’s press coverage when they targeted London Fashion Week in September, referencing the campaigners’ radical activism including staged “die-ins” and throwing of fake blood. These extreme forms of protests, she said, were necessary in order for the fashion industry to wake up and realise that the current model we adopt is unsustainable and damaging to the environment.

XR’s goal is for fashion weeks to be replaced with meetings during which leaders within the industry come up with sustainable and innovative solutions. Clare’s main argument was that despite some change at this year’s LFW events, the shift has not been radical enough. “You wouldn’t know that we have a single digit year left to decide the future of the planet”, she emphasised. By allowing fashion weeks to continue, she argued the upper echelons of the fashion industry will simply continue as if there is nothing wrong.

This concept of disrupting “business as usual” is at the heart of XR’s message.

Fashion week needs to be reformed not cancelled

Leanne Elliott Young stood for the other side of the argument. As the CEO and co-founder of CommuneEAST, described as ‘an ideas and vision institute’, Leanne counts the British Fashion Council as one of her clients.

For Leanne, there is no need for Fashion Week to be terminated. However, from the outset, she made sure the discussion was more nuanced than this. While she may not want the historic weeks to end completely, she advocates for reform and a more innovative culture based firmly around sustainability.

Almost as soon as she had taken the stage, she expressed her worry that being at the event may have been “career suicide”, but tried not to let this put her off, as she aimed to paint “London as a place of innovation.” Going on, Leanne said her aim was to show that “we can interrupt fashion week and recondition what it is.” This redefinition is important, she claimed, in an industry that employs “1 in 6 people on the globe.”

It’s the fast fashion brands that are most culpable for the industry’s environmental footprint, Leanne argued, but the change makers come in the form of new, revolutionary designers. Wearing an unconventional dress by sustainable designer Louise Gray, Leanne referenced the designer’s production process as an example of what the fashion industry is truly capable of.

The fashion industry has eaten itself

However, for Clare, who has a background in fashion, this simply isn’t enough. At this point, she passionately referenced David Attenborough's speech "we cannot be radical enough" in the face of an ecological crisis.

Among other demands, XR is encouraging people to boycott shopping for a year – a point that host Grace Campbell questioned as potentially unrealistic. Clare went on to elaborate that the shopping ban would focus on fashion brands that have wholly unsustainable supply chains, urging people to purchase second-hand, charity and vintage instead. This, she argued, was realistic.

The culture of over-consumption was also discussed, with Clare concluding that “the fashion industry has eaten itself.” This statement was framed in the context we are currently in, where “a third of Londoners buy new clothes every six months” and the average number of times a piece of clothing is worn “has decreased by 35% compared to 15 years ago.”

Despite Leanne’s assertion that innovation and upcycling would be enough to reform the industry, Clare concluded that fashion weeks are not yet showing that they take this seriously. She also noted the shocking fact that in the UK, clothing imports are not considered in our overall emissions total. This means clothes produced overseas do not count when we consider our country’s emissions. In her opinion, this perhaps explains why the government has been able to claim emissions have reduced, whilst we continue to ship in fast fashion at a worrying rate.

The debate concluded with both sides asking the audience to write to local MPs, with Leanne stating, “everyone in this room has the ability to make change.”

What was the result?

At the beginning of the event, only 18 people in a room of around 50 voted for fashion weeks to be cancelled. By the end, another voting option was added: to keep fashion weeks, but majorly reform them. With this new option, almost every hand in the room went up.

Die-hard devotees of traditional debating may find this an inconclusive vote, after all, this was a yes or no question. But the event wasn’t a debate in the traditional sense. Both sides are aware and clearly anxious about the urgency of the climate crisis, but shouting each other down is no longer the answer. My prevailing feeling was that there is no simple solution to this complex argument, but an inclusive debate is a step in the right direction.