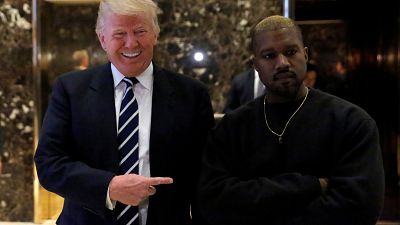 American rapper Kanye West has announced that his Yeezy shoe collection will be taking a sustainable turn in the next two years.

On Thursday, the musician spoke at the 2019 Fast Company Innovation Festival, revealing the news that he will be factoring the environment into brand production from now on. Yeezy shoes will soon be manufactured in America, opening up “jobs for people back here”, West said. Equally, along with head designer Steven Smith, West is designing eco-friendly shoes made from pond algae for his collection.

The proposed shoes, made using a foam from algae harvested in ponds, have already been unveiled in Atlanta and are awaiting official release. Also in the works are shoes using a “seed-to-sole” process which involves hydroponic production of hemp and cotton.

What’s more, the Yeezy headquarters will also be moving back home to the rapper’s 4,000 acre ranch in Cody, Wyoming. Production processes are set to change, with West talking of using sustainable dye in his trademark products.

“Our color is a big signature of the brand. But also dyeing is one of the main things that's impacting the planet in the fashion industry. So, just being responsible from A to Z”, he stated in the video.

Is Kanye West a hypocrite?

Some may call it ironic that West is set to launch sustainable footwear, when the singer has openly showed support for the American president, Donald Trump, in the past.

Trump has been called a climate denier by multiple sources and even described global warming as "a hoax", Time magazine reported in July. In February this year, Forbes released an article entitled, Trump's Climate Denial Is A National Security Threat citing the president's tweet in 2012 which claims global warming was "created by and for the Chinese."

In January of this year, Trump also made a comment referring to the extreme weather in America at the time. In a tweet he wrote, "wouldn't be bad to have a little of that good old fashioned Global Warming right now!"

Kanye West attended a White House press conference in October 2018 and can be seen hugging the president in the Oval Office saying, “I love this guy right here”. Then, on the first day of this year, West reaffirmed that he still backed the American president with a simple tweet saying "Trump all day."

Just this week, The United States began the formal process of leaving the Paris Climate Change Agreement, withdrawing on the first day it was legally possible. Almost 200 countries signed the agreement in 2015 and made national pledges to reduce greenhouse gas emissions. Under Trump's presidency, the U.S. is now the only country to pull out.