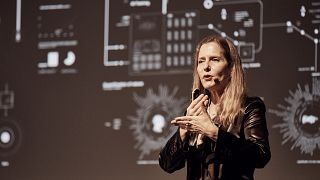 It’s a brisk morning in late October and I head down to London’s Southbank for Dezeen’s first ever international design conference. Dezeen, ‘the world’s most influential architecture and design magazine’ is known to champion innovation and, as such, the jam-packed programme of the day did not disappoint.

With the global design community altogether in one room, radical conversations were had, difficult topics broached and a healthy debate was sparked around the sustainability of the industry. Practically every presentation provided a solution to the unsustainable methods of production adopted in design industries, and many called out the amount of waste generated. The numerous lectures and striking visuals throughout the day left me feeling both captivated and overwhelmed at the sheer range of futuristic solutions being set in motion.

From circular design methods to bizarre materials like microbes and used toilet paper breaking into the market, the speakers all made rousing cases for change. Stopping only to indulge in the fully vegan lunch mid-way through the day, I found myself hanging on their every word.

Four of the most inspiring design ideas from Dezeen Day:

Sewage as a post-plastic alternative

A panel on post-plastic materials in the morning addressed the problem of plastic waste and posited weird and wonderful alternatives in its place. Dutch Designer Nienke Hoogvliet presented us with the idea of using algae and even sewage as new materials in the design landscape.

Having spoken with the Dutch water authorities, Hoogvliet managed to acquire used toilet paper from the sewers and turn it into other forms of plastic and furniture. In the past, she has dyed a kimono using wastewater and even made upholstery yarn out of seaweed.

Read More | Would you feel differently about your clothes if they were alive?

Using Melanin as a design material

Yes you read that right, melanin, as in the pigment in our skin, hair and eyes. I was astounded to hear Paola Antonelli, curator of MoMA New York, discuss the work of Neri Oxman at Dezeen Day this year. Oxman is a designer building installations using melanin and says the skin pigment will inevitably be used in architecture in years to come.

In her commission for La Triennale di Milano, the American–Israeli designer built a series of flesh-coloured plumes. To achieve this, she injected liquid melanin into intricate channels within a 3D-printed transparent brick.

As a professor at MIT Media Lab, where she leads the Mediated Matter research group, Oxman is exploring how bio-based materials can integrate buildings and objects into the living systems around them, using natural processes to perform functions.

She told Dezeen, "My team and I have been in search of materials and chemical substances that can sustain and enhance biodiversity across living systems, which have thus far endured the perils of climate changes. Melanin is one such substance."

In the same presentation, curator Paola Antonelli discussed another inspiring exhibit from the Broken Nature expo at the Milan Triennale. This time it was the work of industrial designer Alex Goad that stood out.

Goad is the founder of Reef Design Lab; his art investigates how we can sustain marine ecosystems using complex, geometric coral designs. His project MARS (Modular Artificial Reef Structure) addresses the decimation of our precious coral reefs by re-imagining the underwater farms as ceramic cast molds. He creates a lattice coral structure, using 3D modelling and printing technologies, that is placed underwater for transplanted corals to grow on. The artificial reef acts as a protective habitat for other species such as fish and mollusks too.

The designer planted the MARS system as part of a coral transplanting project in the Maldives last year. It's safe to say, his work truly illustrates the role of art in protecting the environment.

What Burning Man can teach us about sustainability

French architect Arthur Mamou-Mani discussed his relationship with the experimental festival Burning Man, in a talk at Dezeen Day. Known all over the world for its sense of community and radical inclusion, Mamou-Mani believes the festival's very philosophy can inspire us to live more sustainably. He showed the audience a slide presentation of the 10 principles of Burning Man, which include terms like 'communal effort', 'civic responsibility' and 'leaving no trace', all of which also apply to solving the climate crisis.

Bringing us back to the creative arts, which form a huge part of Burning Man, Mamou-Mani showed us photos of the spiral temple he built there last year. Constructed from wood, the temple structure was an architectural triumph, consisting of 20 timber trusses that formed a tower. The space began as somewhere for visitors to seek refuge from the Nevada sun and reflect, before being burnt in true Burning Man style at the end of the festival. By burning the temple, Mamou-Mani said he really understood the tangible level of waste in the architectural world and why solutions must be found.

In an Instagram post, he writes about the process of burning the temple, saying "we learn to let go and embrace new beginnings, appreciate the value of communal effort yet enable self-reliance and self-expression."

To top off the day and its already green credentials, Dezeen even hired an Environmental expert, Sophie Thomas, to audit the proceedings. Thomas worked with Dezeen beforehand to help the team minimise the impact of the event.

The criteria she considered included how people got to the venue, what they ate and what happened to the food waste after lunch. She also looked at the environmental reputation of the venue, BFI Southbank, to determine how eco-friendly the conference would be overall. In the end, Dezeen Day scored 72%, a pretty impressive feat for a first design conference.