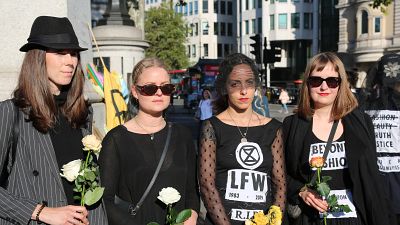 Being brought up in Denmark, Laura has always been conscious of the way what she buys impacts the planet. As she grew, her personal journey led her to completely reconsider the way that she consumed, shunning unnecessary plastics and generally buying less.

For Laura, though, there was one aspect of her life that didn't seem in keeping with her environmental beliefs: a burgeoning career in fashion. After taking a year out to think about what she was doing, Laura made the radical decision not to present a final collection for her master's degree in fashion.

“What led me to make that decision was to look at first of all the fact that we are in a crisis situation and second of all the ignorance and hypocrisy in the fashion industry” she explains, recalling her shock on finding out that we now buy twice the clothes we did 15 years ago and keep them half as long.

“To me, it was really important to address that problem of our consumer culture, where we have been taught to be consumers rather than human beings,” she adds.

“At some point, I just came to the conclusion that if I really want to speak frankly about this I can’t try and sell a collection as well”.

Laura noted that there was no way for her fellow students to recycle or repurpose the waste they were accumulating from the creation of their collections. She set up bins and sent around an email to encourage people to put their waste in them. Unintentionally these bins in the studio became a project for her, to help her peers visualise just how much waste they were accumulating. As students came to her to ask questions, she was able to spend her time increasing their awareness of what they could do with this waste.

At her final show, she collaborated with Extinction Rebellion’s Boycott Fashion to host a die-in at the Royal College of Art Graduate Show. Around 20 activists, dressed in repurposed t-shirts, simulated a mass death to “call the fashion industry to account over its environmental footprint”.

Though she risked failing her masters if she refused to present anything, she thought the risk was worth it in order to highlight our shopping addiction's cost to the Earth. Both Laura and XR were hoping it would draw attention to the organisation’s pledge that asks people not to buy any new clothing for a year.

Laura hopes that as she graduates, the course itself will adopt her dedication to recycling to help educate future design masters students about the problem. Zowie Broach, head of the fashion programme at the Royal College of Art, called Laura’s piece “essential” she says “it felt important that we were able to make sure that her voice, her voice being the voice of many, is heard”.

“For me in fashion what's really relevant today is that [our program] is not just about making a collection, there are so many places for fashion to exist. For her to have created a masters project about protest, activism, questioning, debate, it seemed really relevant and important for us to accept it.”

Broach has big hopes for digital modelling software as an alternative to physical collections, she wants students to branch out from the traditional model of the course. “It might lead some students not to make but not in the activist, protest way that Laura presented,” she says.

“I am very keen for people to start identifying what our digital identity will be as we move forward in the next 5, 10, 20 years”.