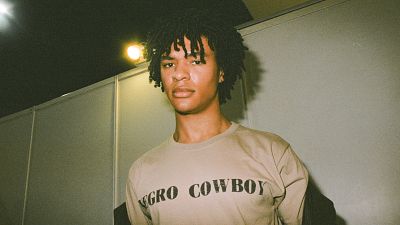 “They don’t like coloured people in Russia,” I was told before heading to Moscow Fashion Week.

The British Foreign Office warns that travellers of Afro-Caribbean or Asian appearance could “attract unwanted attention”, and advises extra care when out and about at night. A couple of slightly awkward encounters around Red Square confirmed it wasn’t the friendliest place.

So, why is it that black designer Soji Solarin chose this city for his first ever fashion week, unleashing his provocative Negro Cowboy collection?

Before the models were even on the runway, the reaction to their presence was less than positive, Solarin tells Euronews Living.

“They were being so rude to my models backstage that I had to walk out. The makeup artist was being dismissive, she was ignoring me and the models.”

Mercedes Benz Fashion Week Russia wasn’t top of Solarin’s agenda even two months ago. After entering a global talent programme, he pretty much forgot about it until the call asking him if he could make it to Moscow for the October event.

“At that time I only had 12 designs in the collection, but needed to bring 25 to show on the runway, so I pretty well ended up designing half the collection in two days.”

Solarin had become fixated by an all-black rodeo he saw in Los Angeles, which paid homage to the long tradition of African American cowboys in the Old West. A tradition that has largely been erased from history.

It inspired him to create the Negro Cowboy collection he decided to bring to Russia. The collection calls the black experience into question and particularly black American identity, as well as issues around ownership of the divisive words it features.

Striking on the runway is how the garments worn by Solarin’s black models often carry slogans such as ‘Voodoo Baby’, ‘Negro Cowboy’, ‘Every Nigga Is A Walking Miracle’ and ‘Colored’.

Those worn by his white models do not.

”We ignore these words so much that seeing them opens the door for conversation,” says Solarin. “I’m a person of colour, so I can call myself coloured. I’m allowed to identify that way, I’m not telling anyone else to.”

He tells me white friends have asked if they’re allowed to wear his clothes.

Living the black experience across the world has given him more insight into its many facets than most. Nigerian-born Solarin moved to the US in his teens and is now based in Berlin.

He says the common factor is that “we’ve always been told we’re third-class citizens”.

Given the history of slavery in US, and the weaponisation of the N-word, Solarin accepts the term is more loaded in America than in his adopted homeland, Germany.

And while the reaction to his collection has always been positive, it has brought ideological gaps to the fore, not only on issues of race and ethnicity, but nationality too.

Even in the creative and liberal Berlin, “I’ve known people to have to ask friends to stop saying ‘nigger’” he tells me.

The word is of black people and for black people, he says. If they choose to use it. “The point is: that word is not for everyone.”

There is more to the racial narrative of Moscow Fashion Week than words, however.

Despite bringing his unique perspective to the show, Solarin is not alone in making a statement on race. The catwalk immediately following Solarin’s featured a series of white models sporting canerows and dreadlocks – a move that has come under fire on runways in the past for cultural appropriation.

“It’s probably best I didn’t see it,” he declares. “I’m not one of those people who thinks white people shouldn’t have dreads, but I don’t think it looks good. There’s plenty of beauty in European culture people could draw on.”

But it is black culture, particularly African culture, Solarin is passionate about.

“When I first moved to the US, some kid asked me if I had a pet jaguar back in Nigeria,” he says. “It wasn’t the kid’s fault, but it stuck and it made me realise that the perception of Africa hasn’t moved with the times.”

The revelation that the experiences shaping his view of identity weren’t shared by those outside Africa has instilled a fire in him.

Though Nigeria may be viewed in the West as part of homogenised and impoverished Africa, it has the continent’s largest economy. Meanwhile Ethiopia, Rwanda, Cote d’Ivoire and Tanzania feature in the top 10 fastest growing economies on Earth, according to forecasters at Focus Economics.

“I want to inspire other black kids, and rewrite the narrative of our existence,” he says of his goals for the future.

The beauty is that there’s no set way to do it, he says. “We can do our own thing, but for me, what I want to achieve with my work is to change the view of Africa.”