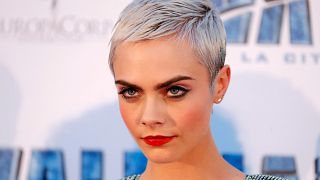 This week, Cara Delevingne announced a collaboration with retailer Nasty Gal, an online brand owned by Boohoo.com. Known for her wacky style, Delevingne’s decision to partner with a highstreet label was long-awaited by fans, who are purportedly “going wild” for the new collection which includes a £42 sequin party dress.

With over 43 million followers on Instagram, Cara Delevingne is the highest paid UK model, having supposedly made in the region of £21 million last year, according to Companies House documents obtained by The Sun. Of late, she has used her significant following and platform in the media to speak about the climate crisis, encouraging fans to care for the environment on Instagram.

Standing up for the environment on social media

Delevingne poses in this recent photo describing herself an ‘Earth Protector’, after having signed a pact calling for ecocide to be considered a criminal offence.

The model has also backed the efforts of environmental activists Extinction Rebellion, posting photos to raise awareness of the peaceful protests going on in London at the moment.

In this post, she writes, “no matter who you are or where you’re from, this is an issue that will affect you and the people you love,” calling this an “ecological crisis.”

Given her environmental advocacy, the fact that Cara Delevingne has launched a clothing collection with Nasty Gal may leave a nasty taste in your mouth. Widely regarded to be a fast fashion brand, Nasty Gal is part of the throwaway culture typical of companies like Boohoo.com, who incidentally bought Nasty Gal in 2017. Boohoo.com has received a vast amount of criticism in recent years for selling “cheap clothes at a high cost”, as The Guardian described it in June. The same article revealed that on average, Boohoo dresses and similar items are “discarded by consumers after five weeks.” Boohoo then came under fire later that year for allegedly paying its garment workers in the UK beneath the minimum wage, which was reported to be between £3.00 and £3.50 an hour.

The 40-piece collection, entitled Nasty Gal ft. Cara Delevingne, boasts a mixture of styles including oversized blazers, leather look trousers, shirts, crop tops and party dresses. One cropped t-shirt has the words “I am a rich man” emblazoned on the front.

A quick glance at the materials used in ‘details and care’ and the majority of the collection is made from polyester (the synthetic fibre derived from coal, air, water, and petroleum). Nasty Gal declined to comment.

In defence of Nasty Gal, the brand started off as a vintage eBay shop in 2006, selling pre-owned clothing at affordable prices. It was named “Fastest Growing Retailer” in 2012 by INC Magazine and became more and more popular with a young female audience due to its cool, feisty rhetoric promoting girl power.

But two years ago, Nasty Gal joined the Boohoo family, firming placing it within the fast fashion retail sphere as it edged further away from its humble roots selling vintage clothes on eBay. As the brand itself states, “we’ve outgrown that apartment, moved to LA, and today we’re bigger and better than ever. We now carry new clothing, shoes and accessories.”

The brand now sells new clothes, with little to no focus on second-hand clothing anymore.

What do the critics say?

We spoke to Alice Wilby, spokesperson and coordinator for Extinction Rebellion’s ‘Boycott Fashion’ about the impact of fast fashion and the consequences of brands partnering with high profile celebrities like Cara Delevingne.

“Boohoo are global leaders in cheap, ‘disposable’ fast fashion and celebrity endorsement has been one of their main tools for success. Enabling them to ruthlessly engage a generation of young women and men, for whom the ultimate sign of success is emulating a celebrity lifestyle on their ‘gram’, via an ever changing wardrobe of on trend clothing.”

In fact, Boohoo’s own website confirms this ever-changing nature, describing itself as a global brand that “doesn't sleep, we're 24/7 and always bringing something new with over 100 new products dropping on the daily.”

Ethical fashion app Good On You exists to call out the eco shortcomings of brands around the world, rating them on whether they have sustainable credentials. Speaking to CEO and app founder Gordon Renouf, it is clear that Boohoo.com, owner of Nasty Gal, is not doing enough for the environment.

"Despite some recent improvements Boohoo needs to do much more to address the impact on the environment and the workers in their supply chain. It's all very well using LED lights and recycling paper in your head office and stores but fashion's major impacts on climate change and other environmental issues occur in earlier stages of the production of our clothes.”

He goes on to say that Boohoo needs to do more to “address worker safety and ensure the workers in their supply chain are paid a living wage.”

Renouf concludes definitively, "Some major fashion brands have shown leadership on climate change by adopting science based targets and by reporting in detail on their carbon emissions and strategies. to reduce them. Boohoo is not one of them."

Granted, Nasty Gal does have a vintage section where materials are sourced sustainably, so they say. It also has a whole page dedicated to the recycling of old clothes through the ReGain app. Good On You CEO Gordon Renouf states “Boohoo has established a supplier code of conduct which is a first step” but it is clear that there is room for improvement.

When it comes to the celebrities involved in these endorsements, are they mere victims of a game the fast fashion sphere is just very good at playing? Cara Delevingne declined to comment when contacted by Euronews Living.

“Arguably, Cara Delevingne has been picked because her Instagram suggests to her fan base that she is an eco warrior”, says Extinction Rebellion’s Alice Wilby. “This imbues Nasty Gal with a green seal of approval, encouraging a generation of environmentally minded, ‘School Strike for Climate’ youth, to keep buying Nasty Gal, whilst steering them away from asking any deeper questions about the environmental impact of the brand.”