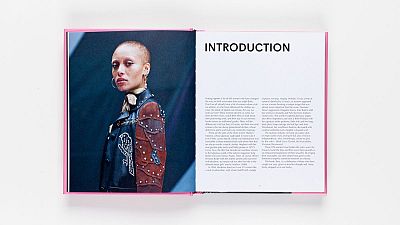 “I think we are over the whole idea of ‘in fashion one month, out the next.’ I want to highlight how having style is so much more important and better for the planet than flip-flopping between trends,” says prominent fashion journalist Tamsin Blanchard. Blanchard has been covering sustainability and ethics in the industry since the eighties. Previously in charge of fashion editorial at the Independent, the Observer and the Telegraph magazine, she has made a career writing insightful features on style and our - sometimes conflicted - relationship with it.

We sat down for a cup of tea, a couple of days after the launch of her latest book 100 women, 100 styles (Laurence King, 2019) to chat about inspiring women and her journey from catwalk reporter to fervent advocate for transparency in the fashion supply chain. Not forgetting of course, her exclusive insights into personal style and how to find it.

“We’ve got the punk princesses, the pioneers, the silver screen goddesses - the Cleopatras - which is one of my favourite chapters,” Blanchard explains as she lays out the structure of her new book. “It’s a hundred women who changed the way we look. I was really keen on the fact that it was women who had done something, but also had really interesting individual style.” From Frida Kahlo to Cara Delevingne, the book works like a who’s who of the most iconic female personalities of the 20th and 21st century.

“If you look at someone like Georgia O'Keeffe, she had a style and she wore the same things over and over again, as women did in the past. You would have a set of clothes, you would mend them, look after them, and they would become your signature. I thought that was really interesting and worth celebrating.” Blanchard tells me. “There’s an element of sustainability ingrained in this whole idea of finding your style and keeping with it. You have a wardrobe full of clothes you love and have a resonance with.” she adds.

Sustainability. You don’t have to spend much time with Tamsin Blanchard before the word in question is raised. This is because she’s a pioneer, having covered the fashion industry from a socio-political and cultural point of view for the Independent way before everyone else. “I liked the idea that you could use fashion to express who you are, what your opinions are, your political leanings even. I was very anti-fur. I realised that fashion was a political issue. I then started to look into social and environmental aspects of the industry.” she recalls.

“I was really interested in brands like Patagonia who had just started making fleece out of PET plastic bottles. This, to me, was a story that seemed far more interesting than what was going on on the catwalks.” she says.

What radically changed the course of her journey was the Rana Plaza incident. On 24th April 2013, the Bangladesh factory collapsed, killing 1,127 garment workers and sparking outrage worldwide. Blanchard was Fashion Features Director of the Telegraph at the time and remembers it as a clear “wake-up call”. “The fact that the factory knew there were cracks in the walls, and the workplace was unsafe, marked the point when people started to realise there was something really wrong going on in this industry,” she explains.

Soon after, she joined Fashion Revolution - a global movement working towards raising awareness of poor conditions in factories and garment workers’ rights - led by Orsola de Castro and Carry Somers. “It was an opportunity for me to use my knowledge and my contacts. My skills as a writer were used to help promote the fashion revolution campaign,” she says.

So, where are we now? I ask. “The fashion industry has become quite polarised in a way. Luckily, there’s a whole new generation of designers coming out who would no longer consider creating a brand without sustainability at its core. They understand about the importance of transparency in the supply chain, being open about what they’re doing, and sharing advice on best practice.That’s really a massive shift”, Blanchard explains.

The science of personal style

“There’s been a huge change in the way citizens think about the clothes they buy. It’s very much been led by the food industry. People are realising that they actually have a choice, and increasingly are going for the better option,” she adds. Finding and refining one’s own personal style plays a significant role in being a more sustainable shopper. Hence, a book like '100 women, 100 styles' aims at providing female readers with visual inspirations and nudging them in the right direction.

“I think a really good place to start is a charity shop, because you are then confronted with a rail of diverse clothes where you can find something that you’re personally drawn to. Choose things that you love, not that have been marketed at you, and maybe don’t really suit you. I think it does take some time. Listen to your friends who often have really honest opinions, go to clothes swaps, and explore your own style in a way that’s not going to cost a fortune either,” Blanchard concludes with a smile.

Find out more about Fashion Revolution and how to join the cause on their website.