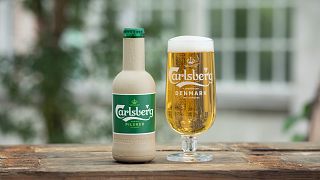 The Danish beer brand Carlsberg has revealed a new prototype for a beer bottle made of paper, in the company’s most ambitious sustainable move yet.

This week, Carlsberg announced the launch of two prototypes of the new bottle at the C40 World Mayors Summit in Copenhagen, Denmark. The newer, eco-friendly versions are made from sustainably sourced wood fibres and are fully recyclable. The concept of a paper-based bottle may sound strange at first, as you wonder how the structure would stand firm, holding liquid safely inside. According to Carlsberg, there is an inner barrier within the bottle that allows it to contain beer so it doesn’t leak.

What we know so far is that the first of the prototypes is made from a thin recycled PET plastic polymer film, while the second uses an 100% bio-based PEF plastic polymer film. Carlsberg states that it will be testing out both with the barrier technology.

The popular beer brand has been working on reducing its environmental impact for a while, having started work on the prototypes back in 2015. Although the paper bottles are yet to be available on the market, the prototypes illustrate the future of what recyclable packaging looks like in the drinking industry.

Carlsberg claims these are the 'world first' sustainable drink packaging designs and has already made significant steps towards improving its sustainable strategy as a company. Last year, the brewing business cut down the amount of plastic substantially by gluing cans together, to avoid consumers buying multipacks in plastic ringed packaging. Glued together, the groups of beer bottles are called ‘Snap Packs’ and will reduce Carlsberg’s plastic use by up to 76%. Of course, the glue is fully recyclable too.

“We continue to innovate across all our packaging formats, and we are pleased with the progress we’ve made on the Green Fibre Bottle so far”, Myriam Shingleton, Vice President Group Development at Carlsberg Group, said in a public statement. Myriam claims that the ultimate ambition is to eventually bring this “breakthrough to market” and to continue to overcome “remaining technical challenges” in plastic consumption.

The beer brand hopes to achieve zero carbon emissions at Carlsberg breweries by 2030.