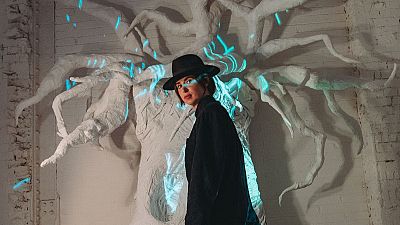 On the first weekend of October, London’s Regents Park is known to transform into an internationally acclaimed art fair showcasing the world’s leading artists. We are of course referring to the legendary Frieze art fair. Frieze sees art lovers flock to the leafy site, both to buy pieces, and simply to experience the iconic exhibitions year on year. But what about the other fair?

The lesser-known 'The Other Art Fair' by Saatchi Art falls on the exact same weekend and is a hub of creative talent, showing off the best emerging artists with a fresher, more dynamic feel to it.

One artist, Lauren Baker, embodied the future of where the art world is heading with an inspiring, multi-sensory installation this year at central London’s Victoria House. Picture a vast tree sculpture towering over you as you set foot in the gallery, serving as a critical reminder of the importance of our forests. Baker’s work illustrates the evocative role art can play in raising issues around the climate.

‘An Open Dialogue with Nature’

Opening up a dialogue with nature, Lauren Baker’s entrance hall installation was all about apologising for the last 100 years of destruction and neglect on behalf of the human race. Her voice could be heard reading out ‘A letter to Mother Earth’, as ripples of light bounced off the branches of the tree and forest sounds invaded your senses.

A mixture of tropical thunder storms, bird sounds and the wind in the leaves hung in the air alongside wet, woody smells from the Amazon rainforest. All the while, the ethereal tree centrepiece stood tall and proud at three and a half metres – a card reader cleverly embedded within it to encourage visitors to donate to tree-planting initiatives.

With the simple tap of a card on your way through the exhibit, you were contributing to the preservation of the Amazon, via Baker’s chosen charity, One Tree Planted. Her mission is to plant 8888 tree saplings.

What is the role of art when it comes to addressing climate change?

This raises the question, can art change our minds when it comes to climate change? One study published in the journal Psychology of Aesthetics, Creativity and the Arts found that 3 out of 37 art works left viewers feeling inspired to take action, after analysing the Paris ArtCOP21 exhibit in 2015.

The research showed minds could be changed through the power of the art, but only if it “contained a hopeful message.” By looking at spectators' emotional reactions, researchers deduced that “beautiful and colourful depictions of sublime nature” were most likely to make people feel like they were able to do something about climate change.

However, it is interesting to note the timely relevance of the research, which was conducted nearly five years ago now. In recent years, there has been a surge in climate change awareness, with groups like Extinction Rebellion fighting to bring the issues to the forefront of our consciousness. Newspapers are changing their eco lexicons to reflect the panic-stricken situation we are facing; ‘climate change’ becomes ‘climate crisis/catastrophe/emergency’ and generic ‘global warming’ has now become ‘global heating’.

According to National Geographic, almost half of Americans asked in a survey would support a tax on the amount of carbon in fuels that generate dangerous amounts of carbon dioxide in 2019. Therefore, given the shift in consciousness, perhaps the results of the original Paris study would be different today as eco anxiety steadily increases. Lauren Baker’s ghost-like tree is a chilling reflection of the effects of deforestation, begging the question, are we more likely to be driven by a desire to avert catastrophe in 2019, than inspired by colourful nature imagery?

The British artist spoke to Euronews Living about her work and the way she prompts spectators to react to it.

"Art is an engaging way to inspire people to consider and act on issues in society. My installation makes a statement about taking responsibility for the destructive deforestation of the Amazon and the damage we've caused to the planet.”

For Baker, not only is it important to “explore themes of energy and connection, love and positivity”, she is also quick to say that she is “seeking solutions.” By placing the card reader next to the tree, she hopes this “resonates and people feel inspired to plant.”

Walking past Baker’s sculpture allowed us to tune into the soundscape she created, giving the distinct feeling that nature was responding to her apology. As Peter Wohlleben, author of international best-selling book The Hidden Life of Trees would argue, “we have been looking at nature for the last 100 years like [it is] a machine", when in fact, "trees have personalities and communicate".

This project was supported by MTArt Agency, the leading art talent agency, who represent Lauren Baker and share her vision for sustainability.