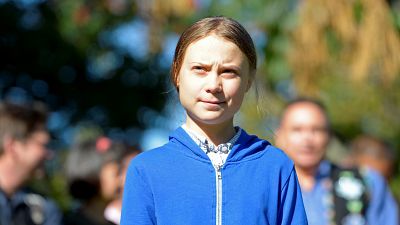 ABC Australia shared the video on twitter, with a plea to watch if "you’re a grown adult enraged by a 16-year-old activist.” Satirists Mark Humphries and co-writer Evan Williams wrote the sketch in response to a series of hateful comments about the young climate change campaigner swarming the web.

What’s the video about?

This example of quick-witted, Australian satire depicts “a middle-aged man with an embarrassing problem.” The problem is that he “gets irrationally angry at a Swedish girl who wants to save the planet.” The man is pictured shouting at a TV screen showing Greta Thunberg at the United Nations conference, while melancholic piano accompanies the scene in jest.

Suddenly, he sits up straighter announcing, “luckily, there is now a number I can call!”, before the scene switches to a call centre in which a woman picks up the phone saying, “Hello, you’ve reached the Greta Thunberg helpline.”

The rest of the video involves a series of angry ‘ grown-ups’ phoning in with various, amusing frustrations concerning Greta. The placid woman on the end of the phone tell us she is “here to tolerate you” and your problems. One man (played by satirist Mark Humphries himself) complains that “the whole charade has gone too far”, noting that Greta Thunberg is now even “speaking in front of a mock UN.” Upon hearing that it was in fact the “real UN” she was addressing, the man proceeds to faint, dropping his phone on the way down.

The video draws attention to the criticism Greta Thunberg has received over the last month, mocking the online trolling culture which allows keyboard warriors to hide behind fake profile pictures on social media. It also amusingly tackles the fabricated solutions many offer on how to live more sustainably, when complaining that environmentalists don’t practice what they preach (“if she’s so concerned about renewable energy, how come she doesn’t wear one of those baseball caps with the solar panels and the fan on the front?”).

The video has since been shared on Twitter by the likes of actor Mark Ruffalo and even Greta Thunberg herself, who wrote: “Hang in there! Help is available.”

What do people dislike about Greta Thunberg?

Ever since her poignant speech at the UN last month, a select number of people have taken umbrage with the Swedish teen, calling her message negative and demoralising. British TV presenter Piers Morgan wrote in a tweet, “she’s got just very, very angry about climate change, abused loads of adults & terrified millions of children.”

In the same vein, British political donor Arron Banks even went as far as to joke about the possibility of Greta’s yacht to the US sinking in a freak accident, while American conservative commentator Dinesh D’Souza even compared the 16-year-old to Nazi propaganda. His words were, “Children—notably Nordic white girls with braids and red cheeks—were often used in Nazi propaganda,” including a photo in the tweet of the teen alongside a woman in Nazi-style clothing.

This blast of criticism prompted the media to respond with a flurry of articles. The Financial Times wrote a feature on “Why middle-aged men hate Greta Thunberg”, while the Independent took the line “Greta Thunberg faces the vitriol of men because she's a 16-year-old girl who isn't being sexualised.”

Clearly, ABC Australia decided to take a different approach, with the generous offer of a dedicated helpline for those with hilariously unsubstantiated claims about the teen activist.