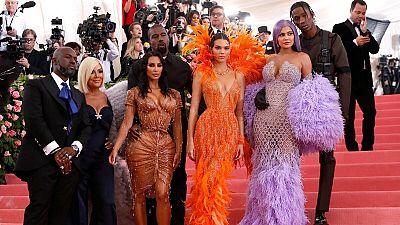 The Kardashian-Jenners have today announced the ever-growing expansion of their fashion empire, with the launch of resale platform Kardashian Kloset. The online site will allow punters to browse real pieces from the reality TV stars’ wardrobes and purchase them second-hand.

They are one of the most famous families in the world, with one of the longest running reality TV shows ever made and a combined net worth counting billions of dollars. Kylie Jenner is on track to be the youngest self-made billionaire ever, ahead of even Facebook mogul Mark Zuckerberg, who was making billions age 23, and sister Kim Kardashian’s Instagram account boasts just shy of 150 million followers. It’s safe to say, we thought they might have enough on their hands. But as the reality show’s namesake implies, it seems they are ‘keeping up with’ the ever-changing fashion industry – this time branching out into sustainability by recycling their wardrobes.

While the resale concept is similar to any other second-hand shop you might find on the highstreet, it goes without saying that these are some of the most highly coveted, exclusive closets in the world. The second-hand designer market has been tried and tested by elite retailers like Harrods before, with the ‘Fashion re-told’ pre-loved clothes store popping up in London’s Marylebone earlier this year. Equally, Vestiare Collective is now one of the most successful online resale platforms for designer wear currently available, with an international community composed of over 7 million members, in 50 European countries. The new resale platform, Kardashian Kloset, will sell clothing straight from the family's wardrobes, with Kris, Kendall and Kylie so far confirmed.

What can you buy from the Kardashian Kloset?

Only a few sneak peeks have been dropped so far, with the Kardashian Kloset Instagram going live a few days ago. Kris Jenner revealed a few details in a recent Instagram post saying, “For the first time you’ll be able to shop items directly from our closets.”

So far Kylie Jenner's shoe collection has been hinted as part of the Kloset collection, in this Instagram post captioned "shoe heaven."

Then there is the red, Gucci handbag - courtesy of Kris Jenner's own, personal collection.

And yet another item from Kris Jenner's wardrobe. This sequined, turtleneck dress would brighten up any room.

Is this a game-changing platform or just a drop in the ocean for the Kardashians?

The fast fashion industry follows the Kardashian family religiously, taking inspiration from their daily outfit choices and public appearances. With that in mind, we spoke to Common Objective (CO) about the impact Kardashian Kloset might have on the sustainable sphere. Shope Delano is Marketing and Communications Manager at CO, a sourcing and information network that connects businesses with the resources they need to be sustainable and successful.

Shope told Euronews Living that while it was "promising to see another resale platform being launched into the market", unfortunately, "resale alone is far from a silver bullet", especially coming from the Kardashian empire. She elaborates,

"Encouraging consumers to purchase pre-loved instead of new is vital if the fashion system is ever to move away from the current linear model of take-make-dispose. Resale has the power to keep our clothes in the current system for longer, and this is a step in the right direction.

However, as a singular mechanism for improving the fashion system, it is flawed. It fails to address the fact that if garments are not designed for disassembly (i.e. through using mono fibres and safe dyes) they cannot be recycled and effectively fed into a circular system. Nor does it address the problem of unethical working conditions, water-intensive and polluting material choices, and the CO2 emissions inherent to production and transportation."

When we asked what she thought about the Kardashian brand as a whole, Shope was critical of the fashionista family, calling out the hypocrisy.

"It’s important to recognise that the Kardashian brand is built on influencing people to consume. They regularly publish sponsored content from fast-fashion brands such as Fashion Nova and Pretty Little Thing."

Shope then challenges Kim Kardashian's own green credentials in relation to her newest venture, Skims, pointing out that the collection is made from "virgin nylon and spandex", despite there being "recycled options on the market."

She concludes skeptically, "within this context, whether this move can be branded as ‘sustainable’ is dubious."