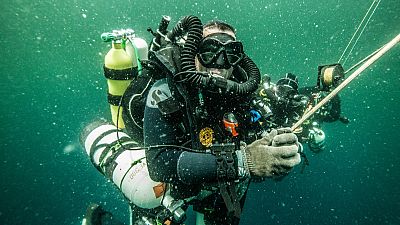 Deep divers have descended into the Amazon Reef for the first time in history this week, off the coast of French Guiana. The purpose of the dive was to raise the alarm around the threats facing our oceans and campaign for a Global Ocean Treaty.

On a year-long expedition from the Arctic to the Antarctic, the divers were travelling on board a Greenpeace ship and have now successfully completed the treacherous dive. The water in the region is known for having little visibility and dangerous currents, meaning humans have never been able to take the plunge before this point. Six divers undertook the dive into the Amazon Mouth basin, 60 to 220 metres deep at different points, to document the reef by taking high resolution photos.

They also collected biological samples to better understand the threatened ecosystem off the north Atlantic coast of South America. DNA samples will be vital for scientists to determine which species are present in the area.

The Amazon reef was discovered in 2016 by the exact same Greenpeace ship, The Esperanza, and was believed to be a [**9,500 square reef system**](https://www.greenpeace.org/international/story/16583/5-things-you-need-to-know-about-the-amazon-reef/ kilometre) at the time. However, since then it has been estimated that it spans a much larger area of around 56,000 sq kilometres of thriving, “pristine” waters. Raising awareness of the reef is crucial, as an oil spill in the region “would be devastating”, according to Greenpeace.

Dives like these are “particularly challenging”, said Alexis Rosenfeld, deep diver and photographer. Due to sediment layers from the Amazon water, strong currents and almost complete darkness, the experience can be dangerous for those who undertake it. However, “it’s totally worth it when the halo of my light beams reveals the Amazon Reef”, Rosenfeld told Greenpeace.

“This is a haven of life, a treasure of biodiversity explored for the first time by humans and whose mystery is only just being revealed,” he said.

What is a Global Oceans Treaty?

Greenpeace has been calling for a treaty since it released its official report in September 2018, ‘Why we need a Global Ocean Treaty.’ Our oceans used to be sanctuaries for marine life and safe havens for species to flourish, but fast-developing technology has meant that our waters are now used for overfishing, mining for minerals and drilling for oil and gas.

According to Greenpeace, oil companies like BP and the Brazilian Government are interested in opening the Amazon reef region to oil exploration projects, which is a threat to this ecosystem and to the climate.

A Global Oceans Treaty would mean a promise to protect at least 30% of our oceans by 2030. “We should be protecting the unexplored parts of our planet, not exploiting them. To do this, we need the strongest Global Ocean Treaty possible,” said Chris Thorne, an Oceans Campaigner at Greenpeace UK.

“Governments must act with urgency to agree a robust treaty in 2020 to safeguard our oceans and climate, and stop wildlife loss.”