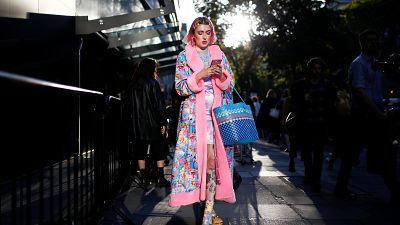 London Fashion Week was a conspicuously different state of affairs this season. Or at least that’s what the coverage is saying. With the theme of Positive Fashion at large, sustainability was at the core of the SS20 LFW edition and the media is taking note. Describing this season as fashion “in the age of climate activism”, The Guardian maintains that just because trends are moving out of the new and into the old, through reclaimed and recycled collections, it “doesn’t mean the end of fashion.”

But was the 7-day extravaganza anything radical after all? Before the week itself even began, the schedule appeared with a key down the right-hand side. M/W indicated menswear and womenswear, while the addition last year of ‘PF’ let you know which collections were categorised as #PositiveFashion. In actual fact, of the 118 catwalks, presentations and events listed on the LFW itinerary, only 6 were labelled PF.

In spite of the disappointing PF turn-out, I was met with a welcome sight walking into the British Fashion Council on the first day. The main exhibit was dedicated to #PositiveFashion, instantly pointing to the significance of the buzz phrase this season. Perusing the room, I chatted to graduate fashion designers committed to separating sustainable fact from fiction, all of whom had made innovative collections by championing waste creation. Central Saint Martins Graduate Erika Maish showed me her intricate pieces made out of can tops and healing beads, while Azura Lovisa explained the use of horsehair and ‘Ramie’ in her collection, the latter being the oldest eco-friendly fibre found in Asia.

Young Liverpudlian designer Patrick McDowell also struck a chord, carefully offering me a dress to hold made from Burberry silk off-cuts, in a rich yellow achieved through vinegar and turmeric dye. When we had finished talking, Patrick handed me a business card made from recycled paper. Needless to say the talent in the room was palpable and, despite the warnings of Extinction Rebellion, certainly set the scene for a London Fashion Week with a future.

Elsewhere at the British Fashion Council hub, Sacha Newall from My Wardrobe HQ was showcasing the booming rental fashion industry, a platform which allows you to borrow designer clothes and accessories for just 10% of their RRP. Alongside the ethical swimwear on show (by Stay, Wild Swim) and functional backpacks made from plastic bottles (courtesy of Groundtruth), London Fashion Week’s #PositiveFashion exhibition covered many bases and managed to assuage my initial scepticism.

Attempts at Solutions and “saying ‘No’ to London Fashion Week”

Amidst flamboyant catwalk shows that were far from environmentally conscious, the highlights of my week came in the form of two designer presentations, Phoebe English and LFW-boycotting Vin + Omi. I had highly anticipated seeing Phoebe English’s collections in the flesh. Her ‘Attempts at Solutions’ collection this season is characterised by deadstock and surplus fabrics, zero-waste pattern cutting and materials made from regenerated ocean plastic and bamboo silk. The presentation did not disappoint, featuring bare-faced models wearing vivid blue, unisex pieces dyed with ‘natural indigo overstain’ and loose fitting, oversized shirts and dresses made from organic cotton and Tencel. In conjunction with the clothes was a series of tactile mood-boards covered in fabric swatches, placed around the minimal venue in London’s Carousel, Marylebone.

I later found out, at a Positive Fashion panel that week, that Phoebe English was going even further in her bid to shift the conversation around approaches to fashion. She revealed to an audience that she has started a ‘sustainable solutions’ Whatsapp Group with her designer contemporaries. If that’s not progressive, then I don’t know what is.

Daring designers Vin + Omi decided to shun London Fashion Week this year, as I discovered on the Tuesday night at a post-show interview with Vin. Personable and modest, Vin was only one half of the eco design duo and didn’t hesitate to enlighten me on why the pair no longer had “anything to do with London Fashion Week”, as the organisation “didn’t want us!” he told me. Clearly, Vin + Omi do things a bit differently. This most recent collection was bold and experimental, made from nettles hand-picked from Prince Charles’ royal gardens.

The nettles were turned into a “fleecey wool”, after a process of “retting”, before local craftsman “naturally stripped them of their brown colour” until the material was white and fluffy, says Vin. As such, their designs do not fit with LFW convention, the designer tells me.

“They won’t put us on schedule because we don’t sell a volume of sales that they want, we don’t follow their traditional plan. We’ve got to have six stockists and we refuse."

He continued, "We are against driving young designers to hit mass targets before they are ready, so as a protest, we are saying no.”

Battling against an era of fast, throwaway fashion, Vin resolved, “we are 18 years slowly gliding, through not selling that much.”

The Positive Fashion panel was not all that positive…

I had been looking forward to the panel all week and was eager to hear industry-led advice on whether London Fashion Week had done enough this season, was it all as positive as it seemed? Hosted by eminent fashion journalist Tamsin Blanchard, the panel had been cherry-picked to provide different perspectives on the topic. Tamsin Lejeune, CEO at Common Objective, addressed the crowd with ostensive optimism, talking of “turning sustainability from niche to norm” and “connecting and learning, on a mission to drive best practice in the industry.”

While her words were inspiring, the more candid approach from environmentalist and model Arizona Muse and Extinction Rebellion (XR) Spokesperson Bels Jacobs, made more of an impact in the room. Arizona described us as the generation who had “lost touch with nature” as capitalism reigns and “big businesses now only care about profit margins.” On the more extreme end, Bels Jacobs made a powerful bid for London Fashion Week to be cancelled, on behalf of XR (ironically protesting outside the building as we spoke).

Describing the “grief we are facing” as the sixth mass extinction threatens humanity, she urged us all to “take on board the truth” and stop buying new clothes, as “consumer power is potent.”

Clearly, there is a way to go for London Fashion Week, as with the industry as a whole on an international scale. Only a fraction of this season’s events were branded #PositiveFashion, as the usual culprits remained firm and unmoving amid calls for sustainability, but the atmosphere seems to have changed. The very fact that environmental panels and exhibits are being held, means the industry is listening and that is something to be positive about.

As Tamsin Blanchard said herself, “we can’t buy our way out of this crisis,” we’ve got to stop, think and re-evaluate the future of fashion.

Watch: Stormtrooper helmet and Holy Hand Grenade up for auction