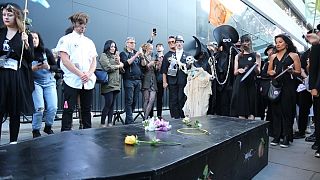 After carrying out disruptive action across London Fashion Week, Extinction Rebellion has held a “funeral procession for fashion” outside the last few shows of the event.

Protesters gathered in Trafalgar Square and walked down toward Somerset House, home of the British Fashion Council, dressed in black with their faces covered. The procession finished outside 180 Strand where spokespeople for the group, Bel Jacobs and Sara Arnold addressed the crowds.

Announcements on a Facebook event for the action created by XR Boycott Fashion state; “now this is our time to all come together to show the industry that enough is enough. Culture needs to be used to tell the truth instead of distracting us from the crisis we face. We will put the old system to rest so we can build again”.

Speaking at the event Extinction Rebellion spokesperson, Bel Jacobs, said "Fashion has the power to change the world but not through business as usual. Instead we must wake people up to their power not as consumers but as citizens. Collectively we have the power to resist a system that is killing us".

XR Fashion Boycott was started as a pledge not to buy anything new for a whole year as a response to fast fashion’s impact on the environment. Now the group are calling for an end to all “seasonal fashion” including the cancellation of London Fashion Week, an event they see as a catalyst for the polluting nature of the industry.

The fashion week funeral march comes after a week of action that also saw the climate crisis activists create a “bleeding red carpet” at London Fashion Week’s opening. Five Extinction Rebellion activists glued themselves to the entrance of the trade show whilst others poured fake blood and conducted a die-in.

Extinction Rebellion has previously called for the British Fashion Council to cancel London Fashion Week but Caroline Rush, CEO of the BFC, responded by saying she believes “the fashion industry has to change from within”.

Christopher Kelly teaches fashion at Central St Martins. "Today's march on London Fashion Week is really vital" he said "I'm really nervous about it because its the first time I've really been on the other side of that". Christopher used to be a fashion designer but his work with Greenpeace educated him about the issue, "We need to adopt another way of living with our planet and fashion is one of the main polluters of that".

Alba said "I really like fashion but I do think that the fashion system is promoting a dangerous consumer lifestyle". She highlighted the rapid turn over of fashion in Spring/Summer Autumn/Winter collections as something she thought was a particular problem. Rosie said she hasn't done anything with Extinction Rebellion before "its important to immerse yourself in the real issue".

Marie told Euronews Living that "we can't go on like this, fast fashion has to end". She said she supported XR's call to cancel London Fashion Week comparing the crisis to a fire alarm where no one leaves.