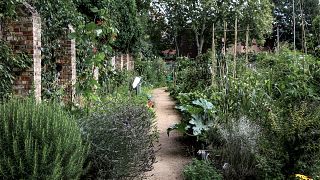 It’s no secret that having your own private green space in a cramped city centre is a true luxury. A neat and tidy garden can add around 20 per cent to the price of a house in the UK which would be an increase of £95,000 for the average London property according to research carried out by Sellhousefast.uk. It is not surprising, then, with private gardens an elusive dream for many city dwellers, that otherwise unused land is being reclaimed to give residents the greenery they crave.

King Henry’s Walk Garden is one such project in Islington, London. The garden offers micro-allotments that are a small step up from your window box full of herbs or bathroom succulent collection. Initiatives like this could provide generation rent with low-commitment options for filling their fridges with produce they have grown themselves. I took a trip to this East London haven to see how a community effort has transformed this wasteland into an opportunity for its plot holders to bring some organic opulence into their urban existence.

From dilapidated warehouse to verdant wonderland

It is a blissfully sunny August afternoon when I visit the garden. With bees buzzing gently around me and scores of backyard birds overhead, it is easy to forget where I am. Disappearing through a tall metal door just off a dead-end road, I find a hidden oasis of calm just a small distance from busy Dalston Junction and a stone's throw from the centre of the capital.

As I walk through the luscious patchwork of plots, Annabel Goulding, Vice-Chair of the trust that manages the garden, gives me a brief history of how the committee came to be the custodians of the land. “It used to be warehouses,” she says, “then a park, but it was too out of the way and the council struggled to manage it”. To prevent the land from being used for criminal activities, she goes on to say, Islington Council decided to take a different approach and consulted with residents about how they wanted to use it. A community garden was the winning suggestion and that is just what they ended up with as, in May 2005, the Friends of King Henry’s Walk Garden volunteer group was formed and it opened to residents just two years later.

The result of this community management is that King Henry’s Walk Garden has become an enviable green space tended by the nearly 80 plot holders who each look after their own two by two-metre patch. Most of the plots grow fruit and veg, serving as micro-allotments to provide fresh produce to those without the time to manage a full-size garden. There are plenty of tips you can take from these tiny plots as well. If there isn’t a project like this near you, plants like chillies, tomatoes and carrots can even be grown in pots on a balcony or small patio. I am astonished by the quantity of produce being grown in the Garden’s accessible containers alone.

After Annabel gives me a lightning tour of the site, Phil Wales, chair of the Garden’s committee, takes me on a more gentle perusal of what the plot holders are growing while we chat. Despite blending into a rolling sea of kale, cucumbers, and carrots, a closer look reveals that each small section holds a sense of the personality of the person that cares for it. I ask if most people grow fruit and veg. “Yes, mostly,” Phil answers, “many grow a mixture of things but some, like the church just down the road, only grow flowers”. She tells me that they use their seasonal blooms to create arrangements for services in the church; a sustainable move that avoids buying commercial flowers that frequently have to be brought in from countries with more favourable weather conditions.

It's not just potatoes and petunias either, it is clear to me from talking to Phil and Annabel that community is central to the garden's ethos.

I notice a pizza oven on our walk and, having always wanted to build one for myself, ask Phil how it came about. She shares the story of how she trod sand and clay together to create a mix that covers the outside. She invites me to come and give it a go making pizzas at the garden’s September produce show. Having the ability to cook food on-site transforms King Henry’s Walk Garden from a place for green-fingered growers to a valuable community asset where all manner of events can be held, including private parties hosted by members.

Most things in the garden are made by volunteers, from those who dug the pond to those that create the organic preserves and pickles sold at their fundraising events. These volunteers then pass on their skills in workshops the garden hosts. I take a leaflet for one that will be teaching attendees about natural fermentation encouraging them to create their own sauerkraut and kimchi using some very local veg. Pictures around the walls of the space’s only building show other community members getting stuck in with construction work as the garden was born.

Local residents don’t have to manage a plot to be able to enjoy King Henry’s Walk Garden, however. Many people opt to be keyholders instead, meaning that they can come and go during daylight hours, enjoying the communal areas that surround the plots.

Even this passive access to greenery can be beneficial. According to the World Health Organisation, there is evidence to suggest that some physical activity in a natural environment can help with depression and stress, health concerns that are often relevant to stressed city workers. I am tempted by membership myself and later take a look at the Garden’s required criteria to find the committee even gives precedence to community members with health conditions that would benefit from access to the outdoors.

King Henry’s Walk Garden is also helping to educate people about reducing their impact on the planet. Annabel tells me members have to keep their plots completely organic and free from pesticides that can be harmful to wildlife. It is refreshing to see how fruitful this is when even private gardeners use chemicals to stop pests from eating their crops. This is particularly important as the community is home to several colonies of bees that provide both delicious local honey and an unparalleled opportunity for education.

Unsurprisingly, gardens like this one are in high demand, the organic food market in the UK is worth £2bn per year according to the Soil Association. The ability to grow your own offers even more choice and transparency when it comes to deciding what to put in your fridge creating the incredible luxury of having locally sourced, personally certifiable organic, seasonal veg within a mile of your front door. It doesn’t get much better than that.

Shunning chemicals is not the only thing that King Henry’s Walk are doing to make their garden more environmentally friendly. Those with plots are invited to put their green waste into collective compost heaps that create a fertiliser to help enrich the soil. The Royal Horticultural Society lists home composting as the most environmentally friendly method of dealing with garden waste and it doesn’t have to be limited to those with a community heap at hand. It's easy to collect your kitchen waste and even if you don’t turn it into compost yourself, many UK councils will collect it from you.

The garden’s members are so keen on avoiding synthetic fertilisers that they are even experimenting with the possibility of using urine to enrich their soil for a study being conducted by University College London.

I leave King Henry’s Walk Garden wishing I lived within its catchment area. Having the ability to access a stunning green space like this is surely a privilege for those who do. The most spectacular thing about it, however, is that it was once anything but luxurious. With community commitment and a group of dedicated volunteers, these Islington and Hackney residents have created a luxury for themselves on an otherwise overlooked piece of land. With access to the outdoors becoming all the more unattainable for most residents of big cities, it’s an example for all of us to consider emulating in our own unused corners of land.